Stories Behind the Bricks

‘Why Build That?’ course takes deep dive into UVM architecture 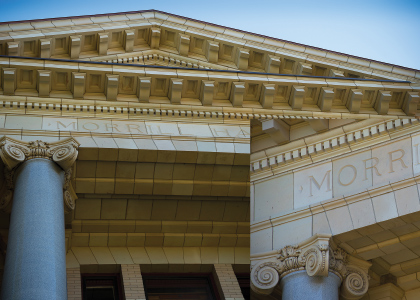 Walking into Morrill Hall Tuesday and Thursday mornings during his first semester at UVM, Tom Freeman has stepped into an immersive learning experience of a different sort.

Yes, on a pedestrian level, Morrill of the distinctive red tile roof, granite entry columns and gray marble staircase, is the classroom location for “Why Build That?” a College of Arts and Sciences Teacher-Advisor Program (TAP) course taught by Professor William Mierse. But to Freeman, the building is also the focus of research at the heart of his work in the course.

Mierse, a veteran professor of art history, initially developed “Why Build That?” years ago, recognizing the rich learning resource in a  campus buildingscape that spans centuries and architectural styles, including gems by the likes of Henry Hobson Richardson and McKim, Mead & White. Also essential, the primary sources in UVM Library Special Collections, where students can trace the long and winding road from inspiration to funding, blueprint to building.

Mierse saw, too, that the course would be well-suited to TAP, which emphasizes group work to build a tight cohort of peers, strong faculty mentoring since the professor is also the students’ first-year advisor, and a bracing, we-are-not-in-high-school-anymore intellectual jolt.

“Most of the students come in with a pre-set conception of what they think architecture is, and during the course of the fourteen weeks that pre-conception is severely challenged,” Mierse says. “They come out with, I hope, a quite different view of how to go about the process of looking at buildings.”

Along the way, Mierse’s syllabus puts a heavy emphasis on enhancing students’ skills in collaborative work, speaking, research, and writing, all core elements of TAP courses. Beyond campus, students explore the architecture of Burlington and examine decidedly different places and cultural/political circumstances with readings such as At Home with Apartheid: The Hidden Landscapes of Domestic Service in Johannesburg by Rebecca Ginsburg.

As student Tom Freeman has delved into the architecture of Morrill Hall during the course, he has come to appreciate the history and symbolism of a building that honors the Vermont congressman, Justin Morrill, who sponsored the Land-Grant College Act of 1862.

“Without this land grant, most universities around America, including UVM, never would have created agricultural departments.  Without these agriculture departments, America’s middle class never would have grown to the size that it is today,” Freeman says. “The Vermont Legislature funded this building which shows that it was not just UVM that felt the need to commemorate Justin Morrill.”

Another landmark building at the opposite end of the Green has been the focus of student Grace Valickis’s research. A psychology major, she has dug into the history of her academic home, John Dewey Hall, originally opened in 1905 as home to the university’s College of Medicine. Beyond a greater understanding and appreciation for architecture, Valickis says the course has sharpened her analytical sense around political, economic, and social issues.

At semester’s end, the students in “Why Build That?” write an argument, framed as a letter to UVM’s Board of Trustees, for why “their” building should be preserved or torn down.

Mierse says his goal isn’t to create architectural or art historians with this one course. Instead, he hopes the students will grow as thoughtful, informed consumers of architecture. Whether it’s building or remodeling a house, managing an office space, or voting on municipal development, Mierse says, buildings and the multiple issues around them impact all of our lives.