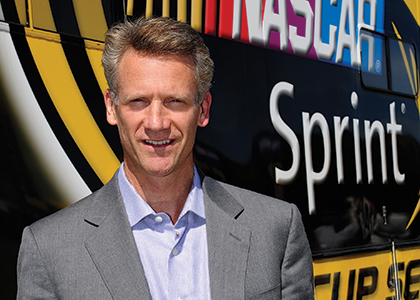 THE JOB     As one of the architects and primary drivers of NASCAR’s ambitious “Five-Year Industry Action Plan,” Steve Phelps ’85 is in position to add to his reputation as one of the most innovative minds in sports. Twice named to Sports Business Journal’s “Forty Under 40” list of influential executives in sports, Phelps helped make the National Football League the most popular sport in America as vice president of corporate marketing from 1990-2004. In his current job as senior vice president and chief marketing officer, he’s hoping to produce similar results for NASCAR. Phelps, who was featured on the CBS reality show “Undercover Boss” in 2011, says, “A lot of my job is trying to continually communicate to the industry and the entire NASCAR ecosystem what we’re doing and why we’re doing it.” Phelps lives in Connecticut with his wife, Dina, and their four children and works with NASCAR offices in NYC; Charlotte, North Carolina; and Daytona Beach, Florida.

CURRENT FOCUS     When Phelps joined NASCAR in 2006, he was convinced that auto racing’s governing body needed to take a hard, analytical look in its rearview mirror if it intended to grow and diversify. That process involved a massive research project that included thousands of interviews with fans and non-fans who attended races, other sporting events, the circus, concerts, and entertainment venues to comment on all aspects of the fan experience. Their feedback formed the basis for a multi-pronged action plan that ranges from better harnessing digital and social media to broadening NASCAR’s fan demographic, with particular focus on Hispanic and Gen Y populations.

COLLEGE YEARS     Phelps grew up in Burlington and has fond childhood memories of trips to Catamount Speedway with his father. He stayed local for college, earning his degree in economics at UVM and balancing the classroom with competition as a middle-distance runner on the track team. (Glory days: Phelps set an individual school record in the 800 meters, 1:53.42, and was also part of a UVM record-setting medley relay team.) “I loved my time at UVM,” says Phelps, whose mother was a secretary in the entomology department at UVM, where three of his siblings also attended. “It will always have a special place for me not just because I graduated from there, but because of the friends that I made and the lifelong love of the institution. It’s part of who I am. I equate my experience at UVM to NASCAR because there’s an incredible sense of community around NASCAR, and people feel passionate about it, and it’s the same thing that happens at UVM.”