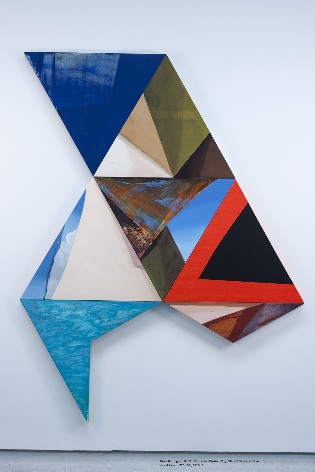 Steve Budington, Associate Professor in studio art, has a solo exhibit at the Green Leaf Gallery of Whittier College in Whittier, California. The exhibit is titled Here from There and will be up from September 4th until October 12th.

“Here from There,” the title of this exhibition of recent work by Steve Budington, originates in the common New England phrase and sentiment, “you can’t get there from here.” In recent years, the artist has been working with concepts of mapping and historical modes of documentation, in particular twentieth-century world maps and enlightenment-era anatomical compendiums. Whereas these earlier forms of mapping sought to present exhaustive overviews of a whole system (global maps, complete documentations of the body’s systems), today’s forms of mapping, with GPS and data archives, offer users only selective windows onto a situation for specific, limited uses. The paintings and drawings in this exhibition consider this difference by working with obstructed views, partial maps, and fragmentation. “I’m interested in creating opportunities for improvising larger meanings from the cultural fragments and limited points of view that constitute a relationship to the world,” Budington says. “I recognize a kind utopian personal desire to see or create a ‘big picture’ in things, to make sense of it all and have clarity and perspective and order, while at the same time I distrust grand narratives and overarching worldviews, which so often stifle the here and now of lived experiences.”

For his exhibition at the Greenleaf Gallery, Budington presents a single shaped painting built of triangular canvases, themselves taken from the shape of a well-known world map by Buckminster Fuller; a selection of works on paper that respond to nineteenth-century anatomical diagrams and more contemporary forms of imaging; and an archive of found image works collected in plastic document sleeves and arranged in a vertical scroll reminiscent of social media feeds. The works together form a field of associations, impressions, and physicalities that consider how the visible world is constructed and received, how one might or might not be able to navigate to here from there.