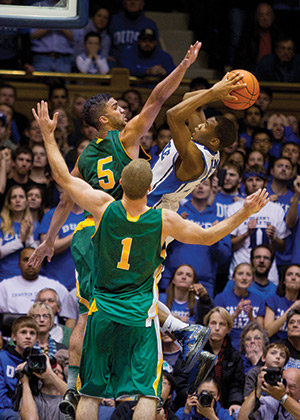 Launching into a roundup of sports highlights with a Catamounts loss is somewhat counter-intuitive. But when that loss is by one point to #6 Duke—they of the glowering Coach K, “Crazies” in Cameron Indoor Stadium, and bazillion-game home win streak over non-conference opponents—well, it is something to celebrate.

Coming off three consecutive losses and in the midst of a seven-game string of road contests, no one had reason to expect Vermont could be a shot away from victory in Durham. As the clock wound down and the Catamounts hung close and even led the game, a lucky few Vermont fans cheered from the rafters of Cameron, more watched on ESPNU, and many shared the experience via social media—Facebook and Twitter lighting up with comments and plenty of “Go Cats Go!”

The spirited underdog performance against Duke, of course, brought back memories of the upset of Syracuse in the 2005 NCAA Tournament. With a strong regular season, in a battle with Stony Brook at the top of the America East standings, the Catamounts looked to be in a solid position for a possible run through the conference tournament with the prize of an America East Championship and a chance to return to the Big Dance.

Coach Lori McBride’s women’s team has had a rougher go of it this season, standing at 6-17 overall and 3-7 in America East in early February. Freshmen Kylie Butler and Kristina White have quickly proven themselves at the college level with Butler twice earning conference Rookie of the Week honors. Junior Niki Taylor was America East’s Player of the Week after she played a key role in consecutive victories over Wagner and UMass-Lowell.

As the university marks fifty years of men’s hockey, Coach Kevin Sneddon’s team has shown a great sense of moment, putting together a strong season in front of the Gutterson faithful. Marquee wins have included a 5-2 victory over Penn State in a game played at Philadelphia’s Wells Fargo Center and taking the Sheraton/TD Bank Catamount Cup on home ice. The Cats defeated Notre Dame, then ranked #2, in the Irish’s first-ever game in Hockey East. A five-game winning streak during the fall semester included back-to-back weekend sweeps over UMass and Maine. Freshman Mario Puskarich made a habit of earning Hockey East Rookie of the Week honors, four of them in a six-week span. Senior Chris McCarthy has been a force throughout the season and has been named a semi-finalist for the Walter Brown Award, recognizing the best American-born player in New England. In late December, UVM was nationally ranked for the first time since the 2009-10 season and the squad has remained in the polls, rising as high as #17. In mid-February, the team stood at 15-9-3, 7-7-0 in Hockey East.

With a victory over #9 Boston University in January, the Cats earned their first win over a ranked opponent during Coach Jim Plumer’s tenure. That milestone is among a number of high points in a season that saw UVM standing at 13-13-4, 9-7-1, fourth in Hockey East in mid-February. While just a junior, Vermont native Amanda Pelkey has already written her name at the top of the UVM record book for points and goals. On the defensive side, Roxanne Douville has been among the standouts, earning the conference’s Goaltender of the Month recognition in December and keeping that form going with performances like thirty-six saves in a win over Providence. Off the ice, senior Danielle Rancourt was nominated for the 2014 college Hockey Humanitarian Award.

The Catamounts have continued their domination of the EISA circuit this season, running their string to twelve consecutive victories with a win at the Dartmouth Carnival February 7-8. Beyond the American collegiate scene, UVM alpine skier Elli Terweil competed for Canada at the 2014 Winter Olympics in Sochi, and Nordic skiers Jack Hegman, Stephanie Kirk, Cole Morgan, Maggie Williams, Marion Woods, and Scott Patterson competed at the 2014 FIS Nordic Junior and U23 World Ski Championships in Val di Fiemme, Italy. Following a national championship in 2012 and a third place finish in 2013, the Catamounts will travel to Park City, Utah, for the 2014 NCAA Championships in March.