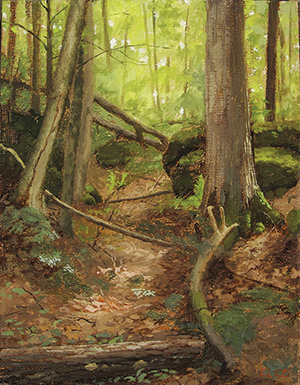 The pendulous branches of the Norway spruce slowly move

as though approving our gentle walk in Woodstock,

and the oak leaves yellowing this early morning

fall in the parking lot of Marsh-Billings-Rockefeller.

We hear beneath our feet their susurrus

as the churning of wonder, found, too, in the eyes of a child

who has just sprinted toward a paddock of Jersey cows.

Some have never fallen in love with a river of grass

or rested in the dignity of the Great Blue Heron

standing alone, saint-like, in a marshland nor envied

the painted turtle sunning on a log, nor thanked as I have,

the bobcat for modeling how to navigate dynasties of snow,

for he survives in both forests and imaginations

away from the dark hands of developers and myths of profits.

Some are called to praise as holy, hillocks, ponds, and brooks,

to renew the sacred contract of live things everywhere,

the cold pensive roamings of clouds above Mount Tom,

to extol silkworm and barn owls, gorges and vales,

the killdeer, egret, tern, and loon; some must rest

at the sandbanks, in deep wilderness, by a lagoon,

estuaries or floodplain, standing in the way of the human storm:

Copyright © 2016 by Major Jackson, UVM professor of English. Originally published in Poem-a-Day on November 15, 2016, this poem was commissioned by the Academy of American Poets and funded by a National Endowment for the Arts Imagine Your Parks grant.