Growing up in an Italian American World 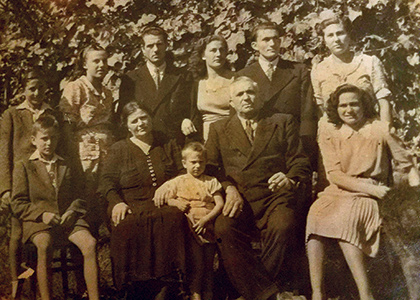 As in many working-class Italian American households, mine was one where loud voices and other sounds constantly ricocheted off the walls, a condition that made for a loving family life but worked against a reading habit. “Shut up, Johnny’s trying to read!” my mother would yell at the top of her ample lungs, adding another sonic layer to the mix.  In the spring of 2015, a few months before her passing, I sat with my mother (Clara Dal Cortivo Gennari) for several hours one afternoon in the home where I grew up in Lenox, Massachusetts. We reposed in a tender, poignant silence that was punctured every few minutes by a series of shotgun-like non sequiturs that began to cohere into a kind of spoken word performance: “Your cousin Richie called. I had to hang up on him.” “I like that Judge Judy. She’s fresh.” “I don’t care for meatballs. My mother never made meatballs.” “What do they mean by vegan?” And one I’d heard many times: “You know me. I don’t trust anybody.”

My wife once said, “I love the timbre of your mother’s voice, the way she leans hard on certain words.” Leans hard. Yes:  a hard voice, a blunt and barbed voice, serrated, suspicious, unyielding, and yet—here’s the miracle—a voice bursting with curiosity, compassion, and empathy; above all, a hunger for connection. “Let me ask you something,” she’d say, or “You know what gets me?” or “You know what I’m saying?” (as in: “It’s not like the capicola I remember. You know what I’m saying?”). She’d grown up in Bergen County, New Jersey in one of those Italian families much like the one scholar Fred Gardaphé has memorably described from his childhood in Chicago – a family in which “only the contagiously sick were left alone.” It was a milieu akin to the one filmmaker Martin Scorsese remembered from his upbringing in Queens and Little Italy—a perpetual scene of “people crowding around each other in small rooms.” The Dal Cortivo kitchen table sat in the middle of a very small room less than an arm’s length from stove and sink. People piled on top of each other, gesticulating, touching, connecting. When anthropologist Thomas Belmonte observed in Italian Americans of the WWII generation “a warm and spontaneous relatedness to others,” “a suffused, tactile, almost erotic openness and frankness in interaction,” he might have had my mother’s people in mind as the tribal model.

My father, Remo Gennari, who passed in 2011, was socialized into a different style of acoustic Italianità before marrying my mother and folding into the Dal Cortivo soundscape. He was a man of precious few words, a man who communicated most powerfully in a companionable language of silence. His was a life-hymn sung largely in the key of solitary quietude. As a farm boy in the north of Italy, he awoke before dawn, clutched a scudella of hot coffee to his breast for warmth, ambled to the cow barn, bent his ear to the wind gently brushing the field grass, and contemplated the day’s chores. Late in life, hard at springtime work turning garden soil, alone in silence for most of his waking hours until nightfall, he’d look skyward to the moon to divine proper planting times for that season’s herbs, aromatics, root vegetables, beans, lettuces, and tomatoes.

The Gennari farm of my father’s boyhood was in Marola, a small village outside of Vicenza. In Italian folklore, the Vicenzan archetypically is a figure of austerity, reticence, sonic reserve. This is an image perfectly personified by my father—and flatly contradicted by some of the loudmouths in his own family. Dad could be a loudmouth too, alas, in his own way. This conspicuously quiet man could astonish with sudden and passionate vocal eruption. You’d be driving in the car, an hour or two since his last utterance, and...BOOM...a thunder clap of laughter or speech that pinned back your ears and rattled your bones. It was a farm field voice, a factory floor voice (after migrating from Italy in 1947 he worked as a welder in the power transformer division of General Electric in Pittsfield, Massachusetts), a voice not well modulated to intimate spaces. It was a voice of powerful conviction on the weather, say, or something from a Red Sox game the week before, or some peculiarity of traffic engineering or automobile design, or the low character of certain politicians.

The point I’m making is that I grew up in an Italian American world of keen and vivid soundfulness, a world whose reckoning demands what anthropologist James Clifford calls “the ethnographic ear.” Pellegrino D’Acierno calls Italy and Italian America “an ear-intense culture in which the voice itself is a sonic spectacle.”  I’m talking about soundful Italian bodies and spaces, animated, audible bodies and spaces, resonant at all volume levels, from fortissimo screaming across the dinner table to the sacramental pianissimo that breaks through the cacophony when time comes to savor the risotto. I’m talking so far about the private domestic sphere, but Italian American soundfulness in the public sphere is a subject of deep historical resonance. From organ grinders, fruit peddlers and crooners to political orators from Cicero to Cuomo, the Italian has long been a figure of acoustic power and fascination.

We all know acoustically fascinating Puerto Ricans, Greeks, Irish, Koreans, Australians, Swedes, Canadians, Oregonians, and even Vermonters. And we know that noisiness is a loaded signifier of racialized and ethnicized difference; voices marked as loud, rowdy, noisy, or boisterous, that is, are voices heard to be violating acoustic norms of respectable, properly assimilated middle-class whiteness. Scholar Dolores Castilles speaks of the ritual of the family sing-along in her Mexican American community-of-origin, of tradition-keeping grandparents pumping up the volume from loud to really loud and not infrequently running afoul of municipal noise ordinances. Such ordinances, of course, legislate codes of sonic propriety in ways that privilege the ear and taste culture of gated community elites; people heard as noisy are also adjudged as dressing too colorfully, wearing too much cologne, and persisting in the strange custom of growing vegetables in their front yards. In the elite/plebian dialectic of the Western tradition, as one moves up the economic and educational class ladder, one is expected to become quieter, just as one is expected to become cleaner and more orderly—that is, to exercise more control over one’s body, to master its sounds and smells. Of course, at every rung of the class ladder, in every society, you will find men and women possessed of every bit as much elegant sonic reserve—and as much hygenic mastery and sartorial aplomb—as the iconic English Gentleman. Such fluidity through and across class and cultural boundaries is an essential feature of Italian American sound. There’s the Frank Sinatra of the saloon, all goombah boister and bluster, and then there’s “The Voice,” the gold standard of vocal elegance and nobility.

John Gennari, professor of English, is the author of  Flavor and Soul: Italian America at its African American Edge, University of Chicago Press, 2017.