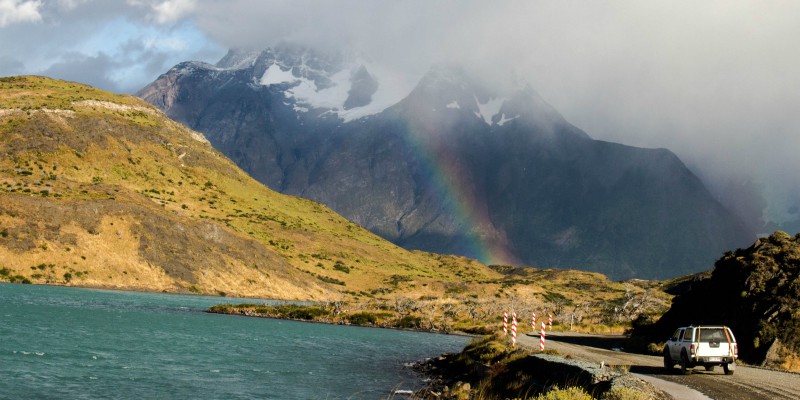 While most UVM students were bundling up in preparation for the start of a new semester last January, Geena Zick ’20, wildlife biology major and anthropology minor, exited the winter season and jumped into summer by travelling to the Chilean Patagonia. “Not that’s it’s super warm given they’re closer to Antarctica than North America,” she said. “But it was definitely stepping into a different world.”

Zick and two other UVM students were part of a 10-person group that spent three months in the region through the Round River Conservation Studies, a non-profit organization that involves students in  academics, experiential learning, and research in remote areas of the world.

The following is part of Zick’s account of her adventure.

“This photo (right) was on a particularly calm day for Puerto Edén, a town of 60 people that can only be reached by a 30-hour ferry ride. The calm waves and rare lack of rain made for smooth sailing through the fjords. Captain Juan, an incredibly skilled sailor from Puerto Eden, navigated us to a few small, extremely isolated islands off of Fiordo Falcon. On our way we saw Peale’s dolphins, sea lions, schools of shrimp, and Magellanic penguins. We even got a view of Pio XI, one of the world’s few growing glaciers.

“We stopped at an old fisherman’s camp or ‘rancho’ which was easy to find because the shore was covered in purple mussel shells that crunched beneath your feet. We arrived late in the day, but the sun doesn’t set until 10 p.m. so we decided to take advantage of the light and began our first standardized biodiversity monitoring transect. We split into five groups: GPS, birds, plants, huemul deer, and amphibians. Every 250 meters, each group recorded data for their species. We continued with our data collection until dark. This data was later used to write a final research paper at the end of the semester. We cooked dinner in the dark and camped next to the beach.

“The next morning, we got back on the boat to travel to another area in Fiordo Falcon. We had to bushwhack our way up the mountain to conduct transects. Towards the top, the vegetation became so thick that I felt like we were in a jungle. Most of the ground was made up of fallen trees stacked on top of each other. It started to rain pretty hard, but I didn’t mind, after all we were in a Magellanic temperate rainforest. There were little hummingbirds, called Green-backed Firecrowns, flitting around us and Thorn-tailed Rayoditos sounding off their alarm calls in the tree tops. We made it back to the boat, all wet and cold, and were surprised by dinner from the captain and first mate. The wind was too strong to sail to our camping spot, so we made brownies on the boat while waiting it out. We camped another night and headed back to Puerto Edén.

“We spent our last day in Puerto Edén painting a boat and hanging signs for the town. At night, the whole town gathered to play games. We played tug of war and soccer until dinner. For dinner, the captain (Juan) from our excursion through Fiordo Falcon, invited us all over for pizza with his family. Throughout the week, it became obvious that the people in Puerto Edén are some of the friendliest and most generous people I have met. I will always remember this beautiful town filled with new experiences and unforgettable memories. Puerto Edén will always have a special place in my heart. I can only hope to find more places like this in the world.”

Geena Zick
“The next morning, we got back on the boat to travel to another area in Fiordo Falcon. We had to bushwhack our way up the mountain to conduct transects. Towards the top, the vegetation became so thick that I felt like we were in a jungle." 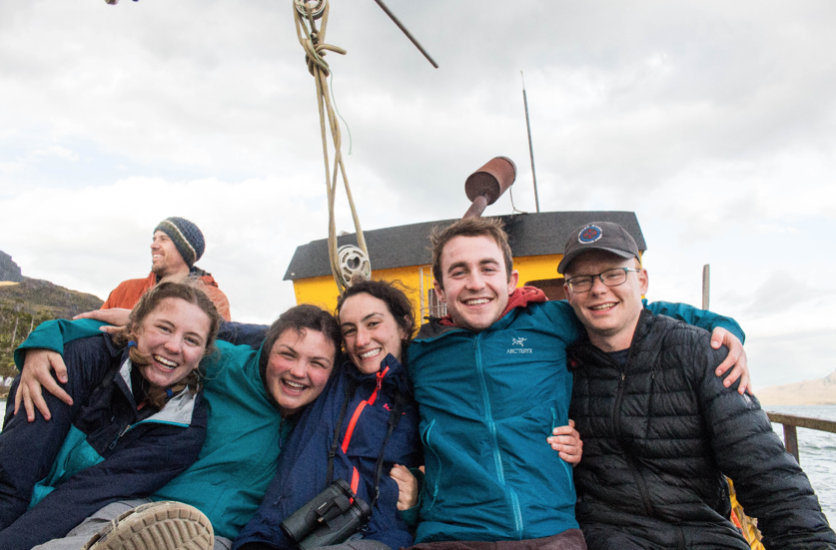 Zick is third from left as the group enjoys a 7-hour boat ride through Fiordo Falcon.