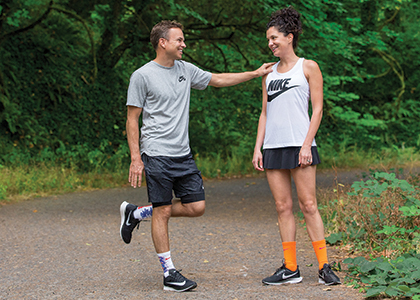 Though neither has the word “engineer” in his or her job title, Oliver and Sara Kinnamon Fritsch say their bachelor’s degrees in mechanical engineering are fundamental to the skills and mindset upon which they’ve built their careers. And it’s what initially brought them together back in Votey Hall, where they were ME study buddies and founding members on UVM’s Mini-Baja team, a competition in which student engineers design, build, and race cars.

“I feel like if you study engineering, you never don’t work as an engineer,” Sara says. She notes that large business consulting firms, where she and Oliver both began their careers, often hire engineers, “knowing that these are people who can solve complex problems in a logical way.”

Oliver recalls he was drawn to an engineering major simply because he felt it was the toughest academic challenge he could take on. He acknowledges moments of doubt along the road to his degree and credits Professor Gerald Francis as a stalwart supporter. A grad teaching assistant in thermodynamics also switched on a light when he suggested that, beyond the facts in the textbook, the deeper purpose of a college education was “teaching you how to think, how to learn, how to problem solve.” Though he excelled academically, earning mechanical engineer of the year for his class and leading the Tau Beta Pi honorary, Oliver admits to tears of joy and relief on graduation day. “It gave me the confidence I could do anything,” he says.

Working in top executive roles at Nike for the past thirteen years, Oliver Fritsch took on one of his largest projects when, as senior product director for basketball apparel, he led the process of redesigning uniforms for the National Basketball Association. It was a sweeping undertaking that reconsidered everything from fabric and fit to celebrating the history and culture of individual franchises and their hometowns in the designs. The new uniforms debuted last season.

Describing this project and a broader Nike ethos, Oliver says, “We start with the athlete. We need to understand athletes almost better than they understand themselves, so we can solve problems that they never knew they had and give them any possible advantage. We’re not necessarily asking them for product insights, but going deeper on their approach to the game, when they felt in the zone and how they got there. Then we translate those insights into creating the right product.”

With a nod to the lessons he drew from working on the Mini-Baja buggy at UVM, Oliver says teamwork, a highly valued skill at Nike, is central to that process—athletes, designers, engineers, all zoned in on a common goal.

After spending most of her career working in business consulting, Sara Fritsch joined Portland, Oregon-based Schoolhouse Electric three years ago. She describes Schoolhouse’s aim as “creating the next generation of heirlooms,” from lighting to furniture to domestic utility goods—all designed with a Portland edge and largely manufactured in their Portland factory. Schoolhouse Electric also has a store in Manhattan’s Tribeca neighborhood, opened another in Pittsburgh this fall, and posts strong sales online.

As president at Schoolhouse, Sara guides and manages a full plate: brand, marketing, product design/development/and engineering, sales, digital and social media. Echoing Oliver’s experience at Nike, she says that being an effective team member and team leader are central to her work. UVM studies in engineering and studio art, years of consulting, and an abiding passion for people’s relationships with their homes—“how a home’s aesthetic and vibe contribute to memories and emotion”—all come together to drive and inform her work at Schoolhouse.

WORK WHERE YOU LIVE

In addition to sharing a major, Oliver, an alpine skier, and Sara, a multi-event athlete in track and field and cross-country, were both varsity student-athletes at UVM. Outdoor recreation options and the famously funky city of Portland drew them west, united in a commitment to “work where we live, not live where we work.”

Their home is on the edge of Forest Park—towering firs, lush ravines, endless trails to hike and run. Together with their two kids, their weekends often include wake surfing on the Willamette River or packing up the car and heading for Mount Hood to hit the slopes.

Like most married couples, work talk seeps into home life. But unlike most, their shared experience as students lends some insight. “We know how each other operates, and we go about things differently. But we have a lot of respect for each other’s perspective,” Sara says. “Oli is one of my biggest advisors professionally, and I think that’s mutual. We talk a lot about work, but in a good way. We both love it.”