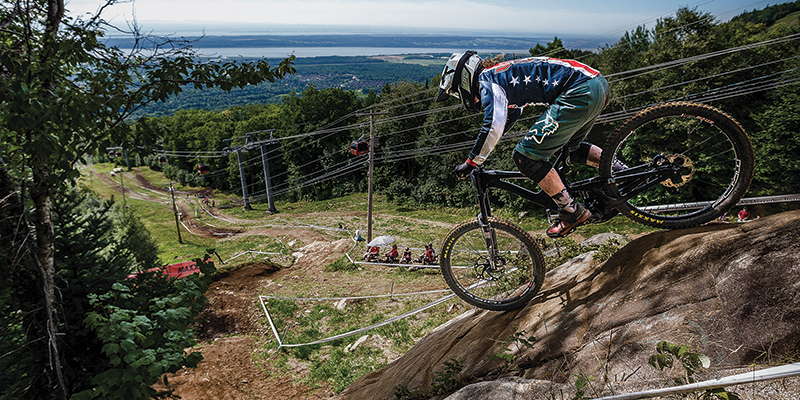 For a cycling team, showing up at the collegiate national championships with a fleet of scorched mountain bikes is not a good look. When the UVM cycling team flew to Missoula, Montana, for October’s USA Cycling Collegiate MTB Championships, most of their bikes took the longer, cheaper road, shipped via FedEx.

All went according to plan until the Thursday morning before the competition. But instead of picking up their bikes on arrival and heading out to pre-ride the circuits at Marshall Mountain, the team was getting the news that a fire in a truck had damaged or destroyed many of their finely tuned rides. Carbon turned to ash.

Quick thinking by UVM sophomore rider Sara Spencer initiated a chain of helping hands that gave Vermont a fighting chance to make the starting line. During high school, she worked at a shop that was a Trek dealer. Using those connections, Spencer called the company’s corporate offices seeking help, and Trek came through big time. Within twenty-four hours, race-quality bikes were shipped from a California warehouse to Missoula, where mechanics at Open Road Bicycle and Nordic assembled them for free in a flash. Other teams, such as Fort Lewis College and the University of Montana-Bozeman, also chipped in with spare bikes.

Vermont made the podium in the overall results, finishing third behind Colorado and Colorado State among Division I club teams.

UVM Cycling has been a compelling success story for decades—a plucky club sport that has drawn some of the best young American cyclists who go on to race as professionals and for national teams after graduation. With help from Jake Hollenbach, a top cyclist in his own right, an attempt at assembling a short list, actually becomes a pretty long list: Katheryn Curi G’02, Jamie Driscoll ’11, Sarah Uhl, Issac Howe ’08, Will Dugan ’09, Dan Vaillancourt ’05, Jessica Phillips ’00, Max Morgan, and Adam Morse ’08, among others.

Senior Nick Lando and first-year Mazie Hayden added their names to those ranks with their performances in Montana and other competitions. At the October championships, Lando won the club division men’s individual omnium (most points overall), highlighted by taking second in the cross-country and short track races. Hayden raced to national championships in two events, downhill and dual slalom.

Hayden is a multi-sport professional athlete, a world-class ski cross racer who began skiing at Killington at age two then took up downhill mountain biking as a complement to her ski training in high school. Competing in Australia in 2018, she represented US national teams in both of her sports. Hayden took second at the FIS World Junior Championships in ski cross and third at the UCI Mountain Bike Downhill World Cup.

As often seems to be the case with athletes in high-velocity sports, Hayden has a laid-back demeanor, clearly someone who can keep a cool head hurtling down a mountain. Learning to ski is a vague memory for her, natural as learning to walk.

Hayden says she grew up on moguls and was quickly hooked by ski cross, an event that puts  four or five skiers on a course at the same time. “I’d always liked going fast, bombing down trails, more than anything. Alpine is good for that, but it is very structured and doesn’t give you that adrenaline of going straight,” she says. “Ski cross is just the perfect mix of jumps and rollers and going really fast. And there is nothing else that has that head-to-head aspect. It gives you such a drive when you can feel or hear someone else next to you.”

Hayden came to downhill mountain biking as a way to improve her skiing—balance and agility and the mental dimension. “Fear training,” she calls it, acknowledging that falling on rocks hurts more than falling on snow (and that her mother much prefers her daughter’s winter sport).

Though Hayden was recruited by several schools with varsity cycling programs, the Honors College student decided on UVM because of academics and the familiar draw of her home state’s slopes and trails. The cycling team has quickly become her campus family. 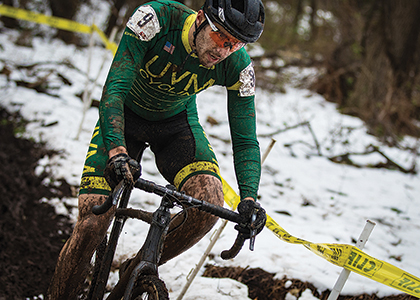 Late in the fall semester, Nick Lando was, like any student, absorbed with upcoming finals. But also on the horizon for him, more pressure to perform when he would travel to Louisville, Kentucky, for the USA Cyclocross National Championships. Lando would take third in the collegiate club division and fourth in the U23 race.

Lando’s roots on a bike are with the motorized kind, racing motocross at age four. In his teens, Lando’s mom began taking him mountain biking on trails near their home in Ringwood, New Jersey. He loved it, soon found he was very good at it, and had to make a choice—muscles or motors. One can only afford so many racing bikes.

The tradition of success and community of UVM Cycling were a central draw to the university for Lando. But the summer before his first year, a crash in a race led to a concussion, a CAT scan, and the surprise discovery of a cancerous thyroid tumor. Undergoing treatment and undeterred, Lando started college. “Since then I try even harder not to take life for granted,” he says. “Life is 10 percent what happens to you and 90 percent how you react to it.”

In his final semester at UVM this spring, Lando balances his studies with his career as a professional cyclist. He’ll travel to California for a series of cross-country mountain bike races, trying to earn a spot for World Cup competitions in Europe over the summer. It’s all about time management, Lando says, in regard to keeping up with coursework in business entrepreneurship while training hours a day.

Lando has been through plenty during his undergraduate years, but the incinerated bikes at 2018 nationals added another dimension. As he told a reporter from cycling publication VeloNews: “There’s some character-building when people show up on the start with scorched jerseys that smell like smoke.”