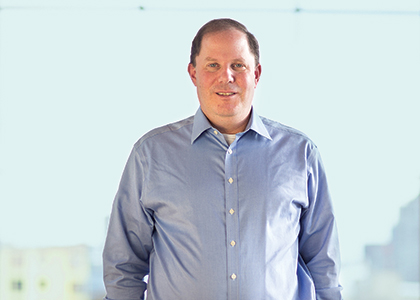 On the staff of the Bill and Melinda Gates Foundation for nearly a decade, Rob Rosen is the Seattle-based organization’s director of philanthropic partnerships. That means connecting closely with the foundation’s major giving programs and managing the team that works with the individual and family donors who have signed the Giving Pledge. An initiative of Bill Gates, Melinda Gates, and Warren Buffet, the Giving Pledge is a commitment by some of the world’s wealthiest individuals and their families to dedicate the majority of their wealth to philanthropy.

“It’s incredibly gratifying and focusing to work on a series of issues that you’re passionate about,” Rosen says. “Having a mission and a sense of purpose is very clarifying, but the issues we’re addressing are a bit of a marathon.” Noting that Bill Gates considers himself an “impatient optimist,” Rosen counts himself fortunate to work for an organization with “the will, the resources, and the focus” to take on challenges, such as eradicating polio, that require a global team effort.

Prior to his work with the Gates Foundation, Rosen built his career in the political world. He first talked his way into a job with Bob Kerrey’s presidential campaign office in New Hampshire during the Nebraska senator’s 1992 run. After Kerrey dropped out of the race, Rosen was recruited to join Bill Clinton’s campaign, where he would remain until Clinton’s election and then serve on the inauguration committee.

“We lived and breathed work nonstop, a group of dynamic and talented people who worked hard and had a great sense of community. It was my first experience of really understanding the commitment that people can make when they’re part of a cause,” Rosen says. Law school at Cornell and work as a lawyer would follow, but Rosen returned to politics when one of his former Clinton campaign bosses called to offer him a job in the White House.

A personal aide to President Clinton and First Lady Hillary Clinton, Rosen lived firsthand the complexity of the office of the President of the United States. He describes his first days in the White House as “humbling,” noting that “there’s an incredible sense of urgency to achieve what you set out to do. The clock is always ticking.”

Rosen served as president of the Student Government Association during his senior year. That experience gave him an early taste of leadership through a seat at the table with faculty and university officials at the height of their careers. “It was a tremendous opportunity to stand up as a strong representative for the voice of the students,” he recalls. Rosen notes that he quickly learned stakeholder dynamics, as well as when and how to represent his constituents in the appropriate way, skills that he drew upon in the White House and still draws upon today.

Looking back, Rosen says the politics of the times and his experience at UVM led to graduating college with a plan to find “an active role in something meaningful,” if not a particular roadmap for how he would get there. More than twenty-five years down the road as he works toward goals that are no less than “revolutionizing how philanthropy can have an impact in the twenty-first century,” it’s safe to say he has found what he was after.