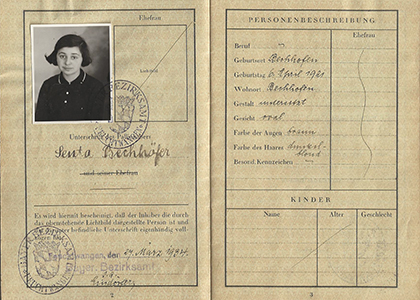 I walked with my ninety-year-old grandmother down a wide cobbled street in the middle of nowhere in Germany. We were in a small town called Bechhofen, and she hadn’t returned for nearly eighty years, since the threat of the Nazis forced her family to flee because they were Jewish. As my grandmother, Senta Baum, and I turned past a trim green and into an unassuming brick chapel, the steeple bells clanged and clanged overhead. “As long as I live, I will never forget those bells,” she told me later. We heard choir music inside. It was the greeting “Shalom Aleichem,” and the German villagers—the children of Nazis— were singing it to us.

My grandmother’s much-anticipated return to her childhood home began with an interview four years ago, when she and her younger brother, Gunther, were featured in a documentary, “Bechhofen, Bethaus und Big Apple,” about the unique synagogue they had worshipped in before they fled Germany—a wooden structure known for watercolor murals that covered its walls. The synagogue had been burned down during the war. Back in Germany, a local newspaper published a story featuring Grandma Senta and her role in the documentary. Since leaving, she had absolutely no connection to Bechhofen. And her husband, my paternal grandfather, insisted they never return to the country that had brutalized both of their families. My father remembers hearing him rail against the Fatherland passionately and frequently enough to dissuaded Grandma Senta from making the trip.

However, two people who read that article wanted very much to get in touch with Senta—Herbert Dommel, Bechhofen’s historian, who has made it his mission to welcome Jews back to Germany, and Anna Lange, who sat next to my grandmother in school. She still remembered my grandmother seventy-eight years later, but had assumed she’d died in the war. Dommel and Lange’s kindness, and the way they reached out to my grandmother led her—and my entire family—back to Bavaria.

In the summer of 2011, my mother, father, sister, grandmother and I arrived in Bechhofen from New York City. Exhausted from our long flight, we collapsed in a modest local inn. I dutifully struggled to fight off jet lag, but my younger sister, Molly, felt no such compunctions and lay stretched diagonally across the bed snoring softly, her long hair falling over her face, I heard a soft knock at the door. It was my mom.

I nodded, and we headed down the stairs together and into the alleyway outside. Bechhofen was tiny, a fraction of a fraction of the size of Brooklyn, my hometown. All of the buildings were low and set close together, with red terra cotta tiled roofs and window boxes bursting with pink flowers. As we drove in, I remembered Grandma remarking upon these buildings: “This is all new,” she said.

Bechhofen could not have seemed a bustling metropolis to Grandma after she’d lived in Upper Manhattan and then Queens, but it must have been a jarring contrast to the home she remembered—a town of wooden and stone structures where she lived with no electricity or running water. To me, she hadn’t just grown up in another century; she had grown up in the Middle Ages. She had learned to write with a quill!

“I think this is a coffee house,” Mom said, pointing as we walked through a well-tended but deserted plaza. The café was empty and clean, with a few small round tables. A stout middle-aged woman stood behind the counter while we gazed at the pastries.

“Hallo” she said in heavily accented English. “What would you like?”

“You’re the Americans, aren’t you?” she asked.

So she’d heard of us. We nodded.

“I’m going to the reception,” she said. “I’ll see you and your family there?”

Baffled, I nodded. It was a small town, indeed.

The sky grew dim as we made our way back to the inn. Grandma was fussing about, putting on earrings, and meticulously applying lipstick and eye shadow. That evening, the town was holding an event in her honor—an official welcome and a chance for her to talk about her experiences living in and leaving Germany. Soon, we were clustered in front of the guesthouse, preparing to walk to church. I looked at my grandmother, dwarfed by my mere five-foot-tall stature, and grasped her hand. She was impeccably coiffed as always (she had barely slept on the plane—in order to keep her hair nice), but she had a nervous look on her round, careworn face. My father, too, looked tense. The war seemed a lot closer to him than it did to me.

Entering the chapel, we immediately heard the villagers singing “Shalom Aleichem.” The song rankled me for an instant—what right did they have to sing it?—until I realized the meaning. I watched Grandma as she took her seat in the front row of pews.

Dommel spoke first (with the deputy mayor translating to English), about paying tribute to the Holocaust and its victims as well as the importance of embracing peace and tolerance in Germany’s present. Then it was Grandma’s turn. She clutched her notes with a shaking hand as she spoke, in her mother tongue, about growing up in prewar Germany and how it felt to be forced from her home. The audience listened with palpable admiration. Some people cried. I felt enormously proud of her as she told her story, reconciling present-day Bechhofen with her own experiences.

As the night progressed, small, almost unnoticeable moments reinforced why we had come. There was an old man who remembered cheating off Grandma’s tests (she remembered him for being the most handsome boy in class). There was a woman whose family had fed Jews in hiding during the war. There, across from the church, was where Grandma’s house once stood.

But one moment in particular crystallized the profound meaning of our trip: At the end of Grandma’s speech, someone asked her if she had gentile friends as a child.

“Ja,” of course, she said, pausing. “We were all friends.

Jesse Baum '15, a native of Brooklyn, New York, studies environmental sciences, English, and German at UVM. This essay originally appeared in The Forward.