The Modern Mission of Historic Preservation 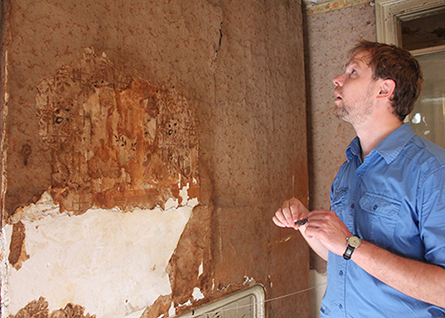 Mount Vernon. Mount Rushmore. Monticello and the Morgan Library. Such iconic places of power and wealth, as Dutch-born Egbert Stolk sees it, have been looked after quite well. As a graduate student in UVM’s historic preservation program, Stolk has his sights on some grittier, real-world locales, ones that drew him away from history as an academic pursuit into a field where he can actively apply his knowledge of the past to save a sense of place for those occupying less vaunted spaces. “I was feeling that I was missing out on current issues,” he says, “things that are important to be involved in, problems that need to be solved.”

If it sounds counterintuitive that historic preservation is playing a central role in addressing contemporary concerns, associate professor and director of the program Thomas Visser assures that it’s not. More than a decade ago he presented a paper on sustainability in historic preservation at an international conference that was then met with mild interest. Now, it’s a mainstream topic in the field.

Leading trends has helped UVM earn a place among the foremost historic preservation graduate programs in the country, yet classes are increasingly drawing undergraduates as well. Students from the Rubenstein School of Environment and Natural Resources, from geography, from Community Development and Applied Economics are finding a fit across disciplines. That makes sense to Visser as he guides the program with an eye toward future career opportunities.

“The National Trust for Historic Preservation,” he says, “has embraced the concept of ‘whole place conservation,’ meaning it’s not just buildings, not just downtowns — it’s place, whether urban or rural, it is this intersection of people and geography, combined with history, that sustains community life, sustains the economy and also, one could certainly argue, sustains what we might call spirit — community spirit.”

This broad perspective calls for experts in policy and planning, economic development, impacts of environmental change and issues of diversity and social responsibility. “It’s not just the old-fashioned view of saving some old building,” says Visser. “I think the public may not understand the dynamic nature of historic preservation.”

Stolk, who speaks five languages and already has a graduate degree in history from Amsterdam, is drawn to the early neighborhoods of New York City for his fieldwork in the program. His interest in the buildings there is centrally an interest in people, the stories behind the walls and how preserving -- or not preserving — buildings impacts the living standards of residents of places like Harlem or Queens.

This summer Stolk secured a paid curatorial internship at the Tenement Museum on Manhattan’s Lower East Side, a 150-year-old landmark at 97 Orchard St. that served as a multi-family apartment building for nearly 7,000 working-class immigrants. Having focused its resources on education, the museum lost track of the preservation work done over the last 30 years. They brought Stolk in to dig up that history and create a narrative of past projects to inform strategic priorities for future restoration.

“This is the pure technical aspect of historic preservation,” he says, “and I think the only way to learn it is in the field.” But Stolk’s passion is for the theoretical and philosophical sides of historic preservation, which he’s embraced by engaging with the stories within the Tenement Museum and which he put to work for his spring break research project on gentrification in Harlem and other New York neighborhoods. It’s a thorny issue for historic preservationists who know that failure to invest in older communities can lead to decline while intervening can displace residents who can’t then afford to stay.

Stolk takes the issues of gentrification and affordable housing head-on as the purview of historic preservation. “It’s part of a larger discourse on who owns the neighborhood and what happens when new people come in and want to change it, ” he says. “Gentrification is not a subject people like to talk about. Race and class difference make it very difficult to discuss.”

Perhaps to create connection and start that conversation, Stolk just launched an experimental project he calls “Spot Stories” in which he interviews people about a building or a park or any place of significance for them. He writes their stories and photographs their spots, which he posts on a newly launched website. “I’m covering the stories behind buildings (or other places) you would normally pass by.”

Frances Gubler, another master's candidate in the program who worked for two years as a collections management fellow at Shelburne Museum, used her research project to delve into the intersection of historic preservation theory and land conservation. She investigated a number of specific sites in Vermont, which provided strong examples of whole place preservation.

Gubler interviewed people from the Vermont Land Trust and other organizations, discussing legal tools such as conservation easements and other restrictions to keep places intact, though they often run up against practical issues, primarily funding. Among her case studies, some had happy endings, as she puts it, and others not. Gubler cites what can happen when whole places, rather than just buildings, are ignored.

“We wouldn’t be able to ‘read’ the history of a Vermont country farmhouse or tavern if it became encircled by massive contemporary highways or big box stores,” she says. “A good example of this worst-case scenario is the tavern in Williston at the corner of Routes 2 and 2A. It’s very hard to pick it out as a historic building in its current landscape.

“Surprisingly,” Gubler says, “it’s almost as difficult to leave rural places alone as it is to combat urban preservation issues like gentrification or shrinking cities.” Stolk and Gubler share the understanding that once a site is displaced — by a high rise or a multiplex — the loss is intangible and irretrievable. “Maybe highlighting the important story behind the door, behind the bridge,” says Stolk, “will create a new awareness of the people they represent.” 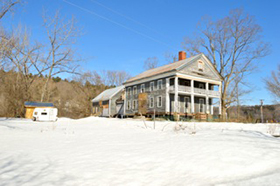 The Jacob Davis Farmstead, an 1830s farmhouse in Montpelier, was among Francis Gubler’s case studies of Vermont cultural preservation. The property is restricted under land conservation and historic preservation facade easements.