The Mediterranean to Hudson Bay 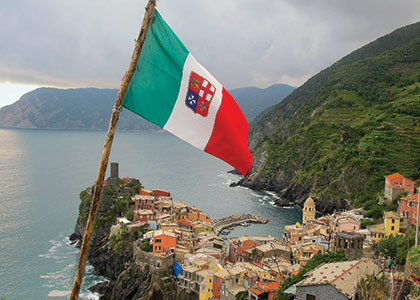 The Washington Post editor called a couple of weeks after Christmas. Back in 1990, the Post’s Sunday magazine was a special travel issue twice a year, built around a theme, and I’d been a contributor over the preceding ten years. “For spring, we’re doing automobile trips,” the editor said. “Are you free to drive the Italian coast, starting, say, in a week or two?”

“How much of the Italian coast?”

“All of it. France to Yugoslavia. We’d need the story by the middle of February.”

How do you say no to an assignment like that?  A few days later the Post sent me a ticket to Nice, with return from Venice, and lined up my car rental at an Italian agency near the French border. The rest was up to me: get the car, backtrack to the border, and stick as close to the coast as possible. Over the course of eighteen days and three million lire worth of gas, hotels, trattorie, espresso and grappa, I had my story.  I’d also commenced a working love affair with Italy that has taken me on assignments to Venice, Sardinia, Elba, and, with my mom, near the end of her life, to her ancestral village in the hills east of Naples.

The travel writer’s glib answer to envious comments about his career is, “Well, somebody’s gotta do it.”  But each of us somebodies had to start somewhere, and it’s seldom on the French-Italian border on orders from The Washington Post.  For me, the start was right here in New England, a year or so after I finished working on my master’s degree in English at UVM. Following a stint at the University Extension Service press and radio department, I had moved to Boston in pursuit of publishing jobs that I soon learned didn’t exist. One idle day I was flipping through the Massachusetts section of a travel guide, part of a well-known series then in a mid-1970s rut so deep that it spelled Worcester “Wooster,” and decided to write the publisher in New York and ask if I could take the section over. It turned out that the “Wooster” contributor had just resigned, and the job was mine.

Around the same time, I had an idea for a Vermont travel story, and pitched it to Yankee magazine. “Go see the editor of our Guide to New England, they wrote back. “She’s at our office in Boston.” The next day I strolled down Newbury Street and into the first of more than a dozen articles for the guide, then a separate publication, and a forty-year relationship with Yankee.

Oddly enough, the piece that sent me out of New England on international assignments wasn’t a travel article at all, but a piece I did in the spring of 1984 for the Massachusetts Audubon Society’s magazine Sanctuary about a long dark night in a scrub pine forest with a Harvard entomologist who was collecting rare moths. I liked that little article and sent it along with a proposal—I forget what I was proposing, but it had nothing to do with moths—to the editor of a new magazine called National Geographic Traveler.  The proposal was rejected, but the editor phoned one July afternoon a couple of weeks later, saying that her reader had enjoyed the moth piece and passed it on to her. She thought enough of it to pitch me a proposal: “Would you want to go up to Churchill, Manitoba in September to cover the polar bear migration?”

It took me about as long to think about that as it later did to decide whether I wanted to hit the roads along the Italian coast. I spent two weeks in that improbable port on the southern shores of Hudson Bay, looking for bears on the tundra, watching a mother and her cubs lumber about on the edge of town, and, after a successful shellfish hunt on the littoral of that cold gray bay, teaching locals how to make mussels fra diavolo—a story I used to entertain Alex Trebek during my 2004 appearance on Jeopardy.

The years that followed offered nothing if not variety. I retraced Columbus’s 1492 route through the Bahamas as part of my research for a companion volume to a PBS series and garnered material for another Washington Post Magazine travel piece along the way.  I drove the One Lap of America transcontinental road rally twice, once for The Christian Science Monitor and once for The Robb Report.  As a contributing editor with Islands magazine, I coaxed a jeep across the roof of the Caribbean on the worst road in the Dominican Republic, walked village to village on the ancient footpaths of Derbyshire, and explored the French outposts of St. Pierre and Miquelon in the Gulf of St. Lawrence.  And for my old client, the Post, I bicycled the length of Prince Edward Island, wrestled a snowmobile through a 700-mile circuit of Québec’s Gaspé peninsula, and visited—or at least  saw—every lighthouse that shines along a 1,000-mile loop around the Chesapeake Bay.

Has all this amounted to an odd way to use that master’s in English? Not a bit. If there was one thing I learned at UVM, it was to always stay curious, and to venture as far as possible down any avenue of research that might lead to a better understanding of the subject at hand, for my readers as well as myself. Just what route did Columbus follow through the Bahamas, and who begs to differ with the conventional interpretation of his log? Where do polar bears go in the summer? Just what laws and traditions keep Britain’s medieval footpaths sacrosanct?  Traveling and writing without ferreting out the answers to questions like these is a mere skimming of the surface, a surface I was more easily able to penetrate using the skills I learned at UVM.

My friend, Professor (now emeritus) Harry Orth, once told our Principles of Literary Research class that a Ph.D. was a beginning and not a conclusion.  I never went on for my doctorate, but I did take a sort of Ph.D. in travel, a calling which I made my career.  And it’s never been an end, but a perpetual beginning.

There have even been a few quite tangible links to what I was up to during those days in Old Mill. On one trip, I paid homage to the subject of my master’s thesis when I cast a fly into the Big Two-Hearted River on Michigan’s Upper Peninsula.  But I couldn’t bring myself to write about that. Ernest Hemingway had already done the job, better than I could.