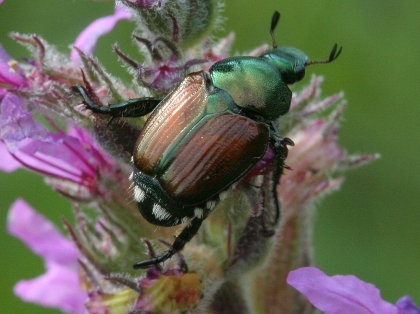 Have you noticed lacy-looking leaves on your pole beans or roses lately? Take a closer look and you'll probably spot the culprit--the Japanese beetle.

This pest typically makes its first appearance in New England gardens in late June or early July and feeds through September. It preys on upwards of 300 different plants including flowers, fruits and vegetables as well as bushes and trees.

The Japanese beetle (Popillia japonica), an insect native to Japan, was accidentally brought into the eastern United States in 1916. Although not considered a nuisance in its country of origin, it has since become an invasive pest in our region, and its range is expanding.

It's easy to identify Japanese beetles by their appearance and the damage that they inflict. The adults are about a 1/2 inch long with a green metallic head and thorax with shimmery copper wings.

After feasting on plants, these beetles leave behind a distinctive mark. The foliage is almost hollowed out, leaving only the veins in a lacy or filigree pattern. Adults often feed in clusters on foliage, blossoms and fruit.

Mature and healthy plants usually survive beetle attacks. By contrast, young or diseased plants may be severely damaged. Many gardeners dread Japanese beetle invasions on their rose and blueberry bushes because this pest destroys the coveted blossoms and fruit.

The larva, or grub, may significantly damage grass and vegetable roots. It is typically C-shaped, whitish in color and about an inch long. Larvae are often found feeding under lawns, so if you see skunks and crows digging up your grass, they are most likely searching for these grubs.

So what can you do to combat the Japanese beetle?

Consider using Integrated Pest Management (IPM) techniques. IPM is a well-researched holistic approach to controlling (as opposed to eradicating) pests while limiting health risks to humans, animals and the environment. To that end, IPM avoids the use of harmful and dangerous pesticides.

The adults are sluggish in early morning and late afternoon when the temperatures are cooler. This is the perfect time to handpick and drop them into a container of soapy water. Early management may further reduce the number of mating insects, so be vigilant.

You'll also want to remove damaged leaves as they attract more beetles. If aesthetics are not important, you can use row covers as a physical barrier against Japanese beetles. It is especially important to keep plants healthy so they can sustain beetle attacks without much damage.

Many gardeners use other IPM techniques such as companion planting and pheromone-based trapping although their effectiveness has been inconclusive. In fact, trapping may actually attract more beetles.

If Japanese beetles are a problem in your garden this year, there are a few things you can do to help control them next year. Applying beneficial nematodes to your lawn during the last three weeks of August will help manage the grub population.

Next year, choose resistant varieties and a site that receives the recommended amount of sunlight per day to ensure healthy growth and strong plants. Another good idea is to improve the soil before planting.

You can get your soil tested for a nominal fee through the University of Vermont Agricultural and Environmental Testing Lab (https://pss.uvm.edu/ag_testing/). Add appropriate nutrients as indicated by the test results. In addition, good watering habits during the growing season will contribute to plant health. 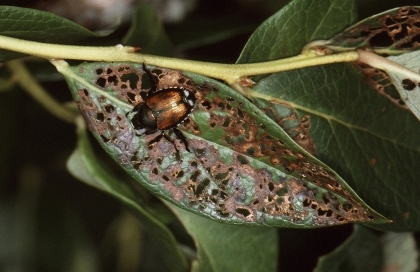 Skeletonized or lacy foliage is a tell-tale sign that Japanese beetles have been feeding on a plant. (photo: Jerry A. Payne/USDA ARS/bugwood.org)