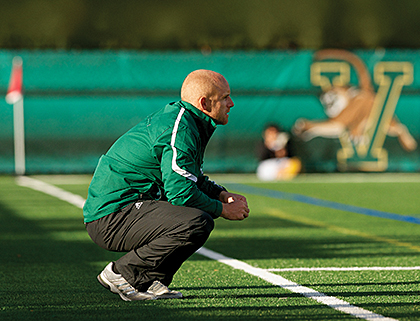 During a season when UVM celebrates fifty years of men’s soccer, it’s fitting that Head Coach Jesse Cormier ’95 digs into some Catamount history when describing his own roots in the program. A native of Hoosick Falls, New York, Cormier attended UVM soccer camps as a kid and liked the style of then-coach Ron McEachen. He also was among the many drawn in by the 1989 squad that won the conference championship and made a deep run in the NCAA Tournament. Recalling a photo after a big win at Centennial Field, fans surrounding an exultant goalie Jim St. Andre ’90, Cormier says, “I was one of those fans. That was an incredibly charismatic team. They had so much personality, and I wanted to be a part of that. Jim, Roberto Beall, Chris Karwoski, Kevin Wylie, Mark Zola… those guys were just impressive soccer players, impressive athletes, impressive people.”

Cormier credits McEachen (“Keach”) with helping him develop significantly during his years on the varsity. “I was a kid who didn’t have a ton of experience at a high level,” he says, “but I felt I had some talent. Keach was able to help me become a soccer player—learn to play the game, play it well, play it hard, and give a lot for the team.”

His next stop after UVM would be Oxford, England, where Cormier strove to make his way playing soccer professionally and found another coach/mentor, Malcolm Crosby, who was especially notable for the way he focused on every player, including the guy from Vermont on the fringe of the squad. “Every training session I wanted to be there, to be part of his environment. I knew that if I coached I wanted to be like Malcolm Crosby—energetic, passionate about the game, and there is some learning going on.” Cormier would spend two and a half years playing in England, a span that deepened his love for the game. With wonder in his eyes still, he describes the British soccer culture, the fervor and knowledge of the fans. “I couldn’t have asked for a better next step after UVM. It was sort of a religious experience,” he says with a laugh, “and soccer was my religion. I was chasing the grail.”

The grail is still at large, but Cormier found that he knew he wanted to stay in the game, and coaching was the way he wanted to do that. After collegiate assistant jobs at Bradley, West Virginia, and Oregon State, he returned to his alma mater as head coach ten years ago. Last season the team won the America East regular season championship, and Cormier and his assistants received the conference’s Coaching Staff of the Year Award. They’ve started the 2013 campaign well, standing at 6-1-2 in early October, but Cormier cautions that a strong start is nice, but he’s more interested in a strong finish.

“There’s a lot of luck involved, especially in this sport, bounces and posts,” Cormier says. “But the big thing is that there’s an undercurrent of belief and commitment that we have right now from the guys. The demands are high. What’s expected of these guys is pretty amazing—academics, on the field. But they come in to a video session after practice, after going to class all day, and they pay attention. They’re dialed in, they ask questions.”

That’s not by accident. Cormier says considering individual character and team chemistry are crucial factors in his recruiting process. He seeks diversity with a mix of players from Vermont, around the nation, Canada, and overseas. Former player Jake McFadden ’08 says the diverse squad that Cormier built made for a significant learning experience beyond the field. “Guys on the team were from Africa, Europe, the Caribbean, and all over the US. Our team was a close-knit unit, and spending so much time with guys from different parts of the world helped me better understand other cultures. The two years I spent living with my teammate Lee Kouadio, a native Ivorian, was among the most valuable of my college experiences.”

Cormier says his coaching staff, consisting of assistants Rob Dow and Ryan Horan, is also built around balance and complementary skills—from administrative organization to handling computer glitches with game video to keeping things calm on the sidelines when contests heat up.

Asked about the coaching philosophy that guides him, Cormier thinks for a moment. “My personal motto—and I just figured this out a couple of weeks ago, it’s only taken forty years—comes down to a simple thing for me,” he says. “Help somebody else win. Help somebody else win. Coming out of high school, it was about me. But here at UVM as a player, I tried to help our team win. Now as a coach my job is to help our players have a plan and help them figure out how to be successful. I want them to win. Not games, but win in life—be winners. Win each day. Win in practice. Win in the classroom. Supporting them in that process, that’s the fun part for me.”

Cormier, the history major who suggests he would likely be a history teacher if he wasn’t a soccer coach, says he reminds his players often that academics come first. And, with the caveat that he’s “useless with math,” he encourages them to bring their books into his office or up to the front of the bus on a road trip to talk over what they’re learning.

Considering where he’d place himself on the coaching personality continuum from Vince Lombardi taskmaster to father figure to big brother, Cormier ponders for a moment. “I would say I’m between a brother and a father,” he says.  “A really old brother—an older brother who is looking to teach lessons.”

For a slideshow of images from across fifty years of Catamount men’s soccer: uvm.edu/vq/vqextra.