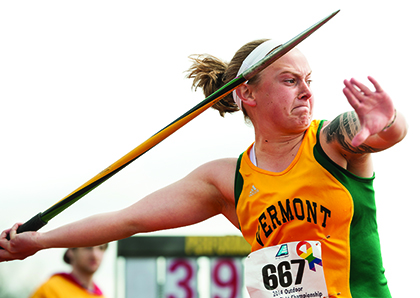 UVM’s Frank H. Livak Track and Field Facility, a nine-lane oval that still exudes a rubbery new track smell, strangely pleasant on a warm spring day, has been in use for two seasons. But the track’s coming out party didn’t happen until this May 3 and 4, when hundreds of athletes hit the surface to run, jump, and throw in the 2014 America East Track and Field Championships.

“We’ve never hosted a meet here this big,” Nika Ouellette, a team captain and three-time All-America javelin thrower for the Catamounts, says several weeks before the event. “It’s been a fantasy for us—trying to imagine the intensity of hosting it. This is one of the finest facilities in the Northeast, and this is a great opportunity to put this track on the map.”

Not only did the track distinguish itself at the meet, so did the UVM team. Ouellette took her fourth conference championship in javelin and teammates earning championships included Nikki Braceras (10k), Cassie Marion (long jump), Brittany St. Clair (heptathlon), Kirsten Weberg (steeplechase), Yolanda Nagarambe (800), and Mallory Duncan (400 hurdles) and Aaron Szotka (10k) for the men. The women took second as a team; the men, fifth.

Vermont has a proud legacy of elite track and field athletes, starting way back with Albert Gutterson, gold medalist in the long jump at the 1912 Olympics. In the modern era, distance runner Judi St. Hilaire ’81 and hammer thrower Anna Norgren Mahon ’96 have competed on U.S. Olympic teams.

Ouellette is the latest in the line to compete at a national level. A native of Brookline, Massachusetts, she came to UVM with a certain leap of faith. The track and field facility was still in the planning process when assistant coach Greg Wisser convinced her that the school’s combination of athletic opportunities and strong academics in environmental disciplines made Burlington the place to be.

Ouellette is an environmental studies major with a minor in plant biology. Faculty members Jeffrey Hughes and Rick Paradis both offer high praise for her work. Hughes notes that though she was the lone undergrad in one of his graduate level courses, the quality of her work and depth of her engagement were the equal of anyone in the class.

While keeping an eye on his throwers’ technique at a recent practice, Coach Wisser jokes: “Nika? We can’t wait for her to graduate and get out of here,” before getting serious and speaking to the athlete’s work ethic, mental tenacity, and team leadership.

A baseball player since age three, Ouellette’s preferred position was pitcher. Of her introduction to javelin in high school, she says simply: “It was something to throw. But I fell in love with the mentality of it, the toughness. My baseball career didn’t go further after that.”

Initially she relied mostly on that strong arm, but in college she has grown as a thrower, gaining speed and strength and refining her technique under the guidance of Wisser. “It’s all about the momentum. If you can generate enough speed, if you can take all of that, stop on a dime, and whip it all through, it’s going to translate into the throw.”

That translation will look something like Ouellette’s school record throw of 50.01 meters. Let’s give that some context. A women’s collegiate javelin is about seven feet long, weighs about one pound. Imagine throwing that from the fountain at the center of the UVM Green to the Ahli Baba’s truck parked in front of Williams Hall. (Don’t try this at home. As Ouellette says of the javelin: “It’s a spear.”)

When the javelin is thrown well, Ouellette notes, the thrower knows it immediately. “You still feel attached to it as it flies. You really feel it hit the ground, as well. There’s something weird about it. I can’t fully explain it—you just have to feel it,” she says.

Ouellette closed out her UVM career with another trip to the NCAA Track and Field Championships, held this year in the sport’s mecca, Eugene, Oregon. Following up on a school record performance in the preliminary round two weeks earlier, she finished thirteenth in the finals. Post-graduation, she plans to move to the Washington, D.C., area, pursue work in the environmental field, and keep flinging the javelin. “This sport is something that has defined my adult life,” she says, “and I won’t walk away from it very easily.”

Proud as she was of her individual performances, Ouellette was just as excited that the UVM women took second overall in the conference meet. Disparate as track and field athletes are in their wildly differing events, she stresses that they are one as a team.

“I defy anybody to try to get through a year of what we do without the support of teammates. It is a really lonely road to go down,” Ouellette says. “Having somebody yell for you when you’re running hundreds or cheer for you when you’re trying to do pull-ups or squats or whatever, it adds a sense that ‘OK, I can do this. Because I’m doing this not just for me, but for my team.’”

The University of Vermont Athletic Department hosted the tenth edition of its annual Rally Awards, presented by XFINITY, in early May at the Flynn Center on Main Street. The department honored each team’s MVP and senior student-athletes. A rundown follows of the seven major awards annually bestowed by UVM Athletics.

Athletic Department Award
Bill Willey ‘66 received this honor presented annually to a member of the faculty, staff, or community in appreciation of loyal support and continuing devotion to the UVM athletic program.