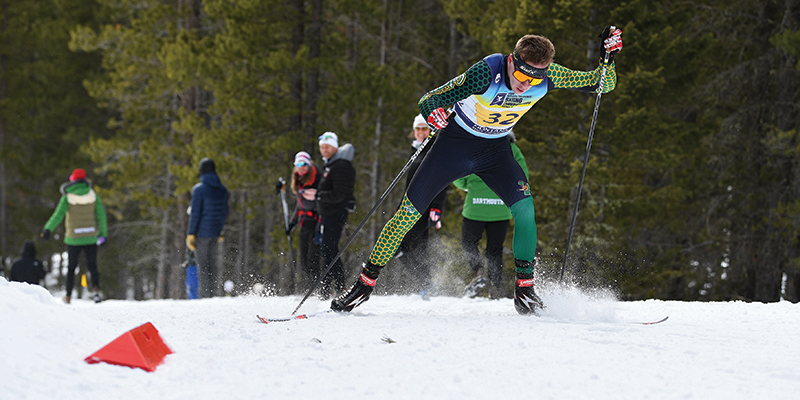 Nordic skier Ben Ogden also excels in the classroom, earning the outstanding sophomore award in the College of Engineering and Mathematical Sciences. Photograph by Brett Wilhelm.

The end was near. On March 12, over the first lap of the NCAA National Championship ten-kilometer freestyle race, Ben Ogden ’22 rocketed to a nine-second lead on the other skiers, including his chief rival, Sam Hendry from the University of Utah. But Ogden often takes it out dangerously hard, and now, on the final lap—heading toward one last brutal hill, high in the thin air above Bozeman, Montana—he wondered if he had enough strength left to get to the line.

Ogden’s coach, Patrick Weaver, looked at a hand-held computer, tracking the times of other skiers in this stagger-start race—and shouted at him that his lead had melted to two seconds. Ogden began the final climb through “a tunnel of Catamounts,” FasterSkier magazine reports, teammates and fans screaming on both sides of the trail. “My sister was right there shouting: ‘show ’em what you’re made of,’” Ogden recalls. “I saw a video later and my technique was horrible, but I was just getting up the hill any way I could.” He reached the crest and flung himself across the finish. “I heard on the announcer that I was leading, but I had to wait a few—long—minutes for Sam to finish,” Ogden says. “It was the hardest I’ve ever gone in any race.” He had won by three seconds, securing the national title in 23:50—and putting UVM in good position for a team win over the remaining races in the upcoming days.

Those races never happened. “I was still in my race uniform,” Ogden says, when he and the rest of the team got a message that the Covid-19 pandemic had caught up with their sport. “The NCAA called off the whole championship, shut down one-hundred percent, right then and there,” he says. “It was such a strange feeling. I was super-stoked and bummed.” Ogden’s win, it turned out, was the final individual championship title given by the NCAA, which cancelled all winter and spring competition thirty minutes after he (and teammate Karl Schulz in, fifth) had ascended the podium.

Ogden had flown in from Germany to Montana a few days earlier, straight off a gold-medal win for the United States in the relay at Junior Cross-Country World Championships. “On the trip I was, like, washing hands a lot, and we were hearing the news, but I wasn’t worried about it,” Ogden says. “It seemed like such a far-away thing.”

Then, “in the three days in Bozeman, it went exponential,” Ogden recalls. “That was the moment when I realized the gravity of the situation. I thought: ‘We can’t sit here and feel sorry for ourselves because our ski race was cancelled,’” Ogden says. “Yes, sports are super-important—and they’re not important at all. When they cancelled the races, I knew I had to go home.”

Ben Ogden grew up in the village of Landgrove, Vermont, population 154. His father skied for Middlebury College where his younger sister, Charlotte, is now a nationally competitive Nordic skier; his older sister Katharine is a three-time NCAA national champion in Nordic skiing for Dartmouth College. “We’re a big ski family, for sure,” Ogden says. And since getting home, Ogden has been training with his cousins and uncle, including a fifty-mile expedition on bicycles with telemark skis on their backs—to skin up and ski down the slopes at Bromley, Stratton, and Magic Mountain.

But Trapp Family Lodge may be his favorite place to ski. “Even though I have lived in Vermont my entire life, I always love seeing the sap buckets on the trees and all the maples in the woods,” Ogden says. “And the racing there is great—up and down with old-school, tight fast corners on the downhill, which keeps everybody on their toes.” Next year’s NCAA championship will return to Vermont, at Middlebury’s Rikert Outdoor Center, “and there will be a lot resting on that one,” he says.

And after college? “I do want to take a crack at professional skiing,” says Ogden, who credits UVM Head Coach Patrick Weaver—two-time national champion and former Olympian—with helping him to build a strong training plan and to dream big. “The Olympics are coming up in two years. That’s the dream,” Ogden says. And then he seems to correct himself. “That’s the reach goal,” he says.

And beyond that? Ogden is not sure. A mechanical engineering major, in May he was (remotely) awarded the outstanding sophomore award by the College of Engineering and Mathematical Sciences. His skis are made by Madshus and he knows another young skier, who studied engineering, that the company hired to work on new skate ski designs. “That’s the type of thing that I would love to do—really get my hands dirty and design things,” Ogden says.

During an engineering course he took this spring, the Mechanics of Solids, Ogden found himself thinking about his skis. “I can’t help but to think how they’re made. I know a lot about the construction of skis, especially skate skis,” he says, and it was “great to have a class about how different materials deform under pressure.” If Ben Ogden reaches his goals, he’ll have a lot of chances ahead to test his skills in the mechanics of skis and what happens under pressure.

Before the season’s sudden cancellation, the men’s basketball team was bound for the America East Championship game and another possible NCAA Tournament berth. In a year of many highlights, Senior Night was particularly memorable as Josh Speidel ’20 took the court for the first time as a Catamount. Playing in the starting line-up, Speidel scored the game’s first basket after teammate and longtime friend Everett Duncan ’20 fed him for a layup. The Patrick Gym faithful roared as fellow Catamounts and the UAlbany squad congratulated Speidel, who has fought back from a severe brain injury suffered in a 2015 car accident to keep his place on the basketball team roster and earn his UVM bachelor’s degree. Read The New York Times report: go.uvm.edu/speidel

The men’s hockey team is set to take the ice under new leadership next fall with the appointment of Todd Woodcroft as head coach. Woodcroft comes to the Catamounts from the National Hockey League’s Winnipeg Jets, where he spent the past four seasons as an assistant coach. Over the last twenty years he has built an extensive resume in coaching and management in the NHL and international hockey. Look for more on Coach Woodcroft in the next issue.