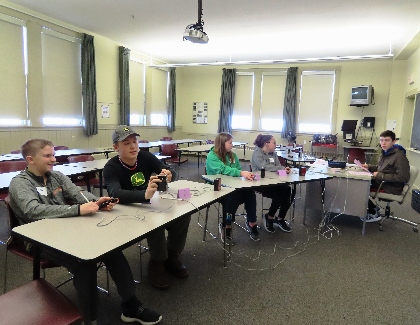 4-H teen assistant Keenan Thygesen, Newbury (far right) goes over the rules for the quiz bowl buzzer rounds with competitors in the Rookie division at the Central and Southeast Region 4-H Dairy Quiz Bowl, Feb. 9 in Randolph Center. Competing in this division were (left to right): Wyatt Chambers and Loren Young, both from Tunbridge, and Amy and Lizzie Vaughan, Newbury. (photo: Lisa Muzzey/UVM Extension 4-H)

Quiz bowl consisted of a written exam and buzzer rounds where the 4-H'ers competed by age group to earn points by being the first to buzz in and correctly answer a question on dairy breeds, feeds and nutrition, anatomy, genetics, showing cattle and 4-H knowledge, among other topics. Scores from the exam and quiz bowl competition were combined to determine final placements.

Winners by age group were:

Two 4-H Cloverbuds, ages 5-7, also took part in the day's activities although did not compete in the quiz bowl contest. They were Sadie Rowlee, Reading, member of the Top of the World 4-H Club, and Thomas Williams, Randolph Center, member of the Middle Branch 4-H Club.

Assisting with the event were 4-H teens Katherine Howard and Lily Vaughan, both from East Thetford, and Keenan Thygesen, Tunbridge. Katherine moderated the written exam and served as scorekeeper for the oral quiz bowl, both for the senior division.

Lily was timekeeper for the event and assisted her grandmother, Judy Vaughan of Newbury, with the buzzer sets for the senior quiz bowl rounds. Keenan read and moderated questions for the Junior and Rookie age groups. All three previously earned a spot on the state quiz bowl team that competed nationally.

Quiz bowl was sponsored by University of Vermont Extension 4-H with support from VTC, which generously donated the space for the event. 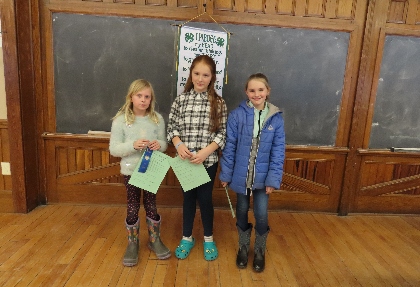 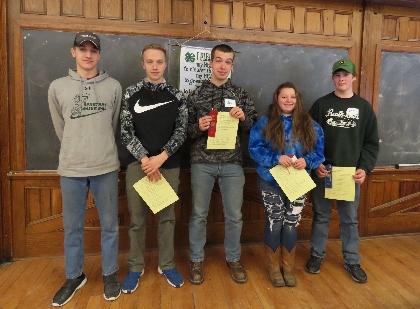