Hope on the Wing 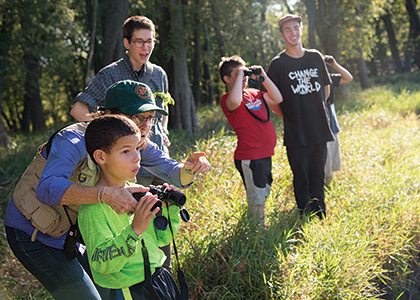 In the despair of Hurricane Katrina’s aftermath, a way to more broadly foster environmental connection was born. Photograph by Joshua Brown

Professor Trish O’Kane’s new course, “Birding to Change the World,” began far from Derway Island at the north edge of Burlington, where, one afternoon last autumn, her class of UVM students tromps through a floodplain forest with a crew of kids from nearby J.J. Flynn Elementary.

In 2005, standing inside the soggy remains of her Hurricane Katrina-ravaged house, a safety respirator strapped on to protect herself from the toxic stew of destruction, she had a strong sense that things needed to change—in her own life and in the world.

That August, O’Kane and her husband had just moved to New Orleans so she could take a job as a journalism instructor at Loyola University, following ten years as an investigative journalist in Central America, exposing killings and other human rights abuses. Then the storm hit, pushing eleven feet of water through her living room. The soil became poisonous with benzene from oil spills, the air with asbestos from demolitions. Like so many of the city’s residents, “our house was bulldozed,” she says.

As she watched trashed buildings and toxic waste wash out into the Gulf of Mexico, O’Kane felt anguished and depressed. She saw how the storm had slammed low-income neighborhoods and disproportionately harmed African-Americans and other people of color. She also felt she didn’t sufficiently understand the water or the land or the creatures that lived there. “A new reality kept pouring in,” she says.

Eleven years later, O’Kane is walking along the edge of the Burlington bike path looking for birds with a group of students—some undergrads, some elementary. Tobey, a fourth-grader, points his binoculars overhead. He describes himself as a blue jay whisperer. “I can find them—fast,” he explains with a broad smile.

“Yes, he spotted three blue jays in about thirty seconds, before anyone else could see them,” says Sara Fergus, a sophomore at UVM. Tobey laughs out loud with obvious delight. Did he know he had this talent “before, say, today?” a reporter asks. “Nope,” he says, “but I do like blue jays.” Then he and Fergus pick out some gulls skimming the treetops.

This newly minted jay whisperer and the college student are “bird buddies” in an after-school birding club at the school. Every Wednesday, they head out the side door of the school and walk more than a mile along the bike path to spend a couple of hours at Derway Island, a nature preserve. And for Fergus, the club’s weekly outings are the required lab—and heart—of Trish O’Kane’s new Environmental Studies course.

Before Hurricane Katrina, O’Kane “never cared about birds,” she wrote in an essay published in The New York Times. After the disaster, she began to wonder how birds survived, and to see them as teachers. Soon she had left New Orleans and returned to graduate school at the University of Wisconsin to begin a PhD—pioneering new ways to teach about the links between ecological and social well-being.

In Madison, as a grad student, she created a Nature Explorers after-school club that connected more than one hundred Wisconsin undergrads with some 125 children at one of the city’s poorest middle schools.  In 2015, she finished her degree and joined the UVM faculty in the Rubenstein School of Environment and Natural Resources. Now she’s working on the same model of teaching in Vermont, beginning by collaborating with staff at Flynn School to help connect UVM students with Flynn’s diverse student body; Flynn’s remarkable after-school program has students from more than thirty countries, including many refugee families.

On the first day the club met this fall, most of the children took to birding immediately, but some worried about touching any dirt. “They thought they would get diseases,” Sara Fergus says. “We’re learning birds together and getting them more comfortable spending time outside. It’s a progression for everyone.” She explains how, in just a few weeks, some of the children went from concern about touching trees—to climbing them.

“Birding is a great way to connect with nature because birds are so connected with everything else,” says Nathaniel Sharp ’18, another UVM student who is taking this service-learning course. “Birds are accessible and exciting, whether you’re seeing a bald eagle or pigeons.”

Or, on this fine blue-sky afternoon, a pair of beavers. Some dozen of the bird club members have just cheerfully hacked their way through a formidable thicket of stinging nettles, calling out birds they hear—“downy woodpecker!” “Was that a yellow-rumped warbler?”—and stopped to discuss the beauties (and slight terrors) of a very large spider tending its web.

Now they have gathered on a steep riverbank overlooking the final bend of the Winooski River before it flows under the bike path bridge and out into Lake Champlain.  A wet shiny nose emerges from the water. Then another nearby. “Whuump!” A loud tail-slap.

Yadiel, a fifth-grader, B. Freas, a senior majoring in Parks, Recreation and Tourism, and professor Trish O’Kane, all smile and watch the beavers closely. “Can you see its eyes? What color are they?” O’Kane asks Yadiel. The boy adjusts his binoculars and watches the beautiful faint V of one beaver swimming toward its lodge. “Black,” he says.

“In the long-term, what I’m really interested in is transformational justice,” O’Kane says. To get there requires some soul-work. “I want my college students to know that they can make a difference in the world. I see that many students who care about the environment are depressed or they are paralyzed,” she says. “I know how that feels because that’s how I felt after Katrina.” But the birding course can bring them to more firm ground.

“What is the environment?” asks sophomore Sam Blair who is taking the course. “Let’s go out and touch it and smell it. Let’s get to know a bit of nature and enjoy it.” As a “co-explorer” (O’Kane’s carefully chosen name for the undergrads in the birding club), Blair has been building stick forts in the floodplain forest on Derway Island with the Flynn students he is mentoring. “So much of the dialogue about the environment is about crisis and destruction,” he says. “It’s really disempowering to only hear about these huge global problems that you can’t do anything about.”