The legacy of James Marsh and John Dewey 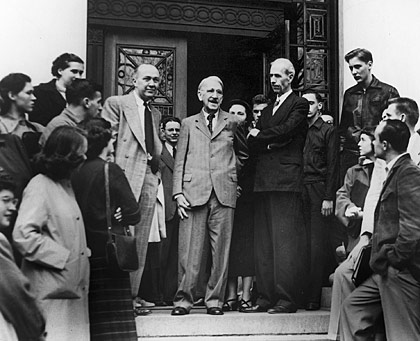 One a president, the other an alumnus, the differences in James Marsh and John Dewey’s personal and political philosophies were profound, yet united by a core ethos that still endures at the University of Vermont. Bob Pepperman Taylor, dean of the Honors College and a scholar of political philosophy, explores the great men’s intriguing contradictions and their common ground.

When Class of 1879 alumnus John Dewey looked back on his education at the University of Vermont, he referred to James Marsh’s edition of Samuel Taylor Coleridge’s Aids to Reflection as his “spiritual emancipation,” his “first Bible.” Marsh, the UVM president from 1826-1833, published the American edition of Coleridge’s work in 1829 with a long philosophical “Introduction” by himself. The book and Marsh’s introduction became a standard text for UVM students in the 19th century. John Dewey was among them, and he would go on to speak and write respectfully about Marsh and his introduction throughout his career.

It is not surprising that Dewey had nice things to say about Marsh’s educational legacy. Dewey’s mature educational philosophy shared with Marsh a hostility toward all mechanical teaching and testing methods. Marsh was the first university leader in the United States to promote an elective system of course work for undergraduates. He established programs for part-time college students. And, not insignificantly, he saved the University of Vermont from almost certain dissolution during his presidency. Dewey’s own education at UVM in the second half of the 19th century was made possible through Marsh’s leadership in the first half, and Dewey would become an educational philosopher friendly to many of Marsh’s reforms and policies.

Nonetheless, it is quite surprising to find Dewey praising Marsh’s introduction, as the intellectual gulf between the two men was miles wide. Marsh was a deeply conservative man, neo-Federalist in his politics and orthodox Congregationalist in his religion. His philosophical work aimed to defend traditional Christianity from what he viewed as the corrupting influence of John Locke and all those who followed Locke in developing a theory of knowledge based upon sensation and experience.

Absolutely persuaded of the sinfulness of men and women, Marsh had little faith in the prospects of political reform and democratization; we are obliged, he believed, to strive toward the Christian virtues, but he harbored little faith in our ability to fully achieve them. His politics were based upon his unshakable belief in rule by the elite for the good of the many, and fully committed to the conservation of this hierarchy. Democratic reforms looked foolishly idealistic. Ironically, given the web of influence uniting his Coleridge introduction and the Concord crowd, Marsh once called “the whole of Boston transcendentalism… rather a superficial affair.” Clearly, Emerson and his circle were much too optimistic about political and social reforms and about this worldly redemption.

Dewey, in contrast, was a democrat, a liberal humanist, a cosmopolitan. He criticized any political order (including our own) that failed to respect democratic equality among citizens. He argued that “religious emotions are not creative but conservative,” that they “attach themselves readily to the current view of the world and consecrate it,” and that this conservatism cripples us in our true mission of developing our intelligence and cooperative social institutions in building an ever more humane and free social and political environment.

Although Dewey rarely spoke in autobiographical terms, and almost never complained, he did once speak of his own religious upbringing in Vermont as the source of a deep wound, “a painful oppression” or “inward laceration,” that was caused by the division in the Christian cosmos of the natural and the supernatural, the separation of the body from the soul, and of nature from God. His entire philosophical project, over the course of his long and productive life, was aimed at overcoming this hurtful “dualism” caused, as he saw it, by Christianity. Dewey wanted to understand human experience as a unified whole and as completely embedded within the natural world. He was profoundly optimistic in thinking that if we could overcome our superstitions and traditional habit of thought, we would be able to build a much happier, free, and satisfying human world.

While Marsh maintained his focus on Vermont and UVM and was never involved with any of the national or international political movements of his day, Dewey became a social activist on both the national and international stages. Indeed, if we think of Dewey as representing much that is best in the character of UVM today — our strong commitment to liberal education, to toleration, to social reform and the improvement of the human lot — Marsh seems a distant and contrary figure.

In light of these profound disagreements, the question is, why did Dewey speak so respectfully of Marsh? It is true that he believed that Marsh was somewhat crippled in his philosophical views by his religious beliefs; he said Marsh “never developed the independence in thought which matched his philosophic powers.” But he also called Marsh “one of the most original and deeply spiritual thinkers whom America has yet produced.” Was Dewey just being polite about the most powerful and influential member of the UVM community in the 19th century?

Not really. For all their disagreements, there was one disposition or quality of character that Marsh and Dewey shared: the firm belief that good thought must be informed by action, and good action by thought. Dewey learned from Marsh a hostility toward philosophical system building, a hostility, that is, toward all abstractions that are divorced from the very practical and recognized problems faced in everyday life, toward what we might think of as “intellectualism.” Marsh, in fact, attacked what he saw as the Lockean orthodoxy of his own day on the grounds that it was profoundly divorced from our own experiences, that it was so smitten by its own intellectual system building that it lost touch with the actual concerns and troubles and truths that grow from lived experience.

When Dewey considered Marsh’s contribution to American philosophy, in an essay first delivered as a talk at UVM, he put it this way: “It is characteristic of him that he holds that knowledge of spiritual truth is always more than theoretical and intellectual. It was the product of activity as well as its cause.” Philosophical reflection,that is, must grow out of real problems and not be the mere inventions of professional philosophers. And this reflection, in turn, must aim to inform our active response to these problems. This pragmatic commitment, so fundamental to Dewey’s understanding of intellectual life, actually had roots deep in the Puritan perspective of a man who would have disagreed with Dewey on almost every substantive issue of philosophy, politics, and religion.

But this pragmatic commitment is not only what gives life to Dewey’s work more than half a century after his death; it is also the commitment that gives life to the meaningful work in all the arts and sciences and professions studied, taught, and represented at UVM today. And this practical concern for speaking to what Dewey called the “problems of men,” and what we today would call the “problems of people,” continues to animate our own academic community more than 170 years after Marsh stepped down as president of our University.

Originally published in the Fall 2004 issue.