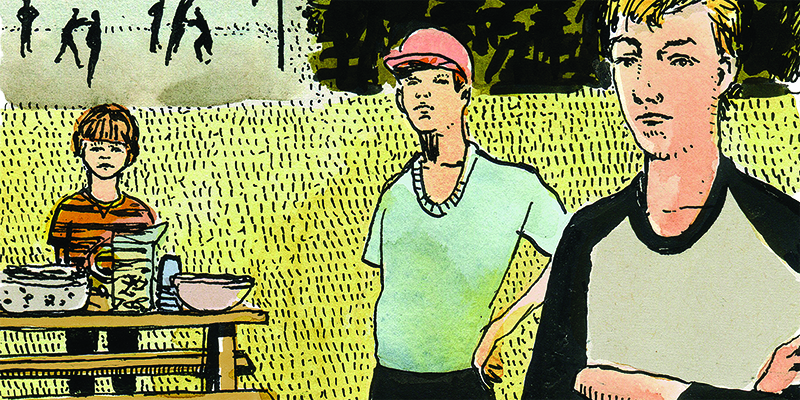 In 1979, the year I was eight, my father’s family reunion was held at a public park in Newport News, Virginia. It was a place of woods and creeks and picnic tables, set against the eastern shore of the southern part of the James River, a few miles before it empties into the Chesapeake Bay. I heard more than one relative that day say they hoped the place wouldn’t get overrun by the locals, meaning the groups of young black males on bikes or on foot from the surrounding poor neighborhoods. They were often there playing basketball on the cracked and faded courts.

Several of my male cousins and I—four or five white boys—played war in the woods while we waited to be called to the picnic area for lunch, where fifty or so relatives, toddlers to the elderly, would chattily swarm around the splintered tables and pile their flimsy paper plates with fried chicken and salads from KFC and all manner of covered-dish appetizers and desserts—soft-shell crabs, coleslaw, banana pudding, lemon squares. After playing for an hour or so in the woods, one of my older cousins, Kevin, a big fourteen-year-old with a mean, crooked-toothed grin and a mom-inflicted haircut, dared me to yell the N-word at the basketball players from behind a thick copse of trees. I was looking out at a full court of ten older black boys and young men, most maybe sixteen to twenty years old, muscles and sweat and back-and-forth joking. One older man—he looked about thirty-five—wore athletic glasses with a band holding them onto his head. I thought he was a teacher, maybe a coach, because everyone listened to him; they waited to see what he would say when there was a foul, a potential foul. He was the center of their disbanding and reforming circles on the court. I stared at the men and boys, especially at the man I thought was a teacher, and then at the metal hoops and backboards, the falling-down fencing rolled up in places like the edges of once-wet paper. The rims were netless. The backboards looked indestructible, like big, square storm grates, and I had been told, had heard, many times, that that was because blacks (what a strange descriptor, I thought even then, for people with skin of widely varying shades of brown) would steal anything they could carry, even a heavy backboard. When I was very young, because of things white people (who are actually more pink or tan or beige) said, and because I was a child and when you are a child everything said is the truth, there is no such thing as a word that is not the truth—because why would there be?—I imagined the houses of black people were filled with pointless objects, stolen for the sake of stealing. Almost every word out of every mouth that I understood to be trustworthy made me believe that black people operated like rats, running wild in the secret streets, hoarding the unusable.

I’m not going to do that, I said to Kevin, hiding from the court now in the deep-green foliage, sweating in the heat, the wet sunshine, sweating from running and climbing the small hills, hills where Revolutionary War soldiers and Confederate and Union soldiers had walked and climbed and run and screamed and fought and killed and died. We were maybe twenty miles from where Dutch traders dragged and slapped the first African slaves onto American soil in 1619. Sometimes I felt the layers of time beneath my feet—or that is how I remember it, or how it feels now, or something. Smell of honeysuckle. Saw of bees. Penny-colored pine needles. Stripe of gold light stenciled onto green grass. Earth smell so strong it must have come from inside my own head. Virginia. Childhood. I go everywhere in the country, can travel the world, and I sit down to write a sentence and I am still there.

Yeah, you are, said Kevin.

No, I’m not, I said, laughing, trying to make it seem as if the whole thing was ridiculous, would require no more of our attention.
Kevin took out a knife, a little plastic knife from KFC, serrated on one side, translucent and blue tinted, and held it up to my throat as the other cousins stood around watching, though I don’t actually remember them doing this, just remember that they were there and that is what they would do in a scene and this is a memoir of sorts, like I said, so I’m kind of remembering and imagining the other cousins, four of them, ragged white boys with filthy clothes and knees and faces or whatever. Dirt-creased necks, black-edged fingernails. I could tap into some working-class white people stereotypes, if those images are useful. Maybe I’ll use the phrase “trailer park” as a place holder in this draft.
Do it or I’ll cut your throat, Kevin said.

I thought about it, yelling the word and then running and it would all really just be a game, some fun at the reunion, but I didn’t want to do it because the man, I still believed, was a teacher of some kind, and he was teaching the boys playing and maybe not only basketball but other things, too, because he kept stopping to talk to them and pat them on the back, and they were paying attention and smiling, laughing at what seemed like his jokes.

I felt the cousins holding me and I felt the dull knife edge saw across my neck and I felt—I feel it again now, remembering—that electric sting, the hot blood on my skin, the panicked slap of my hand on the wound.

And later I showed my mom the cut at lunch but didn’t say how it happened and my mom said, What happened, a stick? and I said, Yeah, a stick, and then she put a napkin against my neck. She lifted the napkin and looked every couple of minutes until the bleeding stopped, said, Some stick. Careful.

Then this image: it was hours later and I was standing in the parking lot at dusk and the black man with glasses in a sweat-stained gray shirt was laughing with all the other black boys and young men as they loaded their basketballs and bags into a clean, new, white church van that had written on its side the Holy Redeemer something something Church of Christ. I must have been with my mom and dad and brothers but they aren’t in the memory. It’s just me at the end of a hot day with a raw, pink cut on my neck and dirt-stained everything and the sky is gray-blue with a distended pink belly.

I am staring at the man and patting gently at my neck. He shuts the van doors. He walks toward me and asks if I am okay and I say, Yeah I am except my neck got cut out in the woods, and the man says he likes to use Bactine on his cuts—I remember this very clearly—even though it burns a little at first but the cut goes away faster and that is usually all there is to it. Good as new. You can get it down at the drug store. Give you some, son, if I had it, but we left the aid kit at church.

I look at the man. He is smiling. I want to say that I got my throat cut because I wouldn’t yell a racist insult at him, but I don’t know what racism is and don’t have the language and don’t know how. Talking. Other people. Me back then. I might as well have been trying to rebuild a car engine or do particle physics.

Before the man gets in the van and drives away, he says, God bless you, son. He says it like it’s nothing, like I just sneezed. Then he pats me gently on the shoulder and looks into me. A second. Two seconds. Brown eyes and blue eyes. Nothing much. Why even remember this?
But in my dad’s ’65 Mustang, on the way home, my mom turns around and says, Why are you crying, what’s wrong, is something wrong? and I say, It’s my neck, my neck hurts, and my mom says, We’ll take care of it honey, we will, just calm down, but it’s not my neck, or the anger and shame and helplessness I feel because of my cruel and stupid cousin Kevin, who could have done anything he wanted to me—beaten me delirious, tied me up, held me to the ground. I don’t know what it is. Exhaustion, the long day, the plastic picnic knife, my white family, those black boys and men, the squalor of the poor neighborhoods near the park turning slowly and darkly now in the car windows, a hand on my shoulder, a blessing at dusk. The world expands every day. Words barely touch it. And now my heart has opened like a sieve and I cannot hold back its tiny flood.

Greg Bottoms is a UVM professor of English. This essay is a chapter in his 2019 book, Lowest White Boy, published by West Virginia University Press.