Enhancing the Future, Preserving the Past 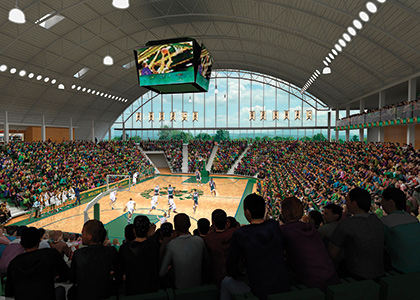 Enhancing the Future, Preserving the Past

Keeping character of “The Gut” key in major facilities plan

“It’s amazing to me that I walk the same halls as athletic director in 2017 that I walked as a first-year student-athlete in 1985,” says Jeff Schulman ’89 G’02. “Part of that is fun and nostalgic. But as the person who  is now responsible for advancing athletics and recreation on our campus, it’s my responsibility to ensure that our facilities are evolving and keeping pace. When I became the AD, I knew it was important to take a fresh look at this whole issue.”

Indeed, the need to upgrade UVM’s athletic, recreation, and fitness facilities is a discussion that Schulman, a former Catamount hockey player, has been hearing since returning to his alma mater in 1993 as assistant athletic director. After he was named athletic director in April 2016, it became his mission to finally end that discussion and move forward with a plan to bring UVM athletics and fitness facilities into the twenty-first century.

Such a plan was presented to the Board of Trustees in February, where a resolution was passed to provide conceptual and financial support for the creation of a full schematic design of a new multipurpose center. The approximately $80 million plan to overhaul the Patrick-Forbush-Gutterson Athletic Complex calls for a new events center/basketball arena on the site of the parking lot between Gutterson Fieldhouse and Patrick Gymnasium; the modernization and preservation of Gutterson for UVM Hockey; and an 86,000-square-foot health and wellness zone (only 15,000 square feet of fitness and recreation space currently exists) to be located at the north, Patrick, end of the project.

The plan emerged from extensive discussions with students, faculty, donors, alumni, and other campus constituents. One key finding: people wanted athletic events to remain on campus, which removed from consideration off-campus proposals in downtown Burlington and South Burlington. There was also strong support for preserving historic Gutterson Fieldhouse.

“For a lot of people, there was a really strong emotional connection to The Gut,” Schulman says. “It’s one of the true iconic college hockey facilities in the country and possesses a character and an energy that’s really unique—like our version of Fenway Park or Wrigley Field. So we wanted to find a way to preserve The Gut, yet upgrade it so the fan experience is modernized and the student-athlete experience is enhanced.”

Another major question that needed to be resolved was right-sizing the seating capacity. Previous proposals called for a shared basketball and hockey arena ranging from 6,500 to 10,000 seats, but they never gained traction. UVM officials looked at peer institutions that built larger shared hockey/basketball arenas and found that most have struggled to fill seats and effectively meet the needs of both sports. This is consistent with recent data showing a nationwide decline in attendance at sporting events.

“It’s important that our facilities continue to be full, and I don’t mind if that means it’s a tough ticket to get,” says Schulman.

While final seat counts and configurations have not been determined, it’s likely that both facilities will have slightly larger capacities than can currently be found in Gutterson (4,035) and Patrick (3,228).  Both will have the flexibility to expand capacity significantly for non-athletic uses such as concerts, speakers, and other entertainment events.

At the February meetings, trustees also began discussion of a funding model that will likely be a combination of institutional sources and private donations.  Pending final approval from the trustees, construction could start as soon as early 2019 with various components coming online in 2021 leading to a full completion date in 2022.

“The magic of this concept, in my mind, is how Gutterson and the new events center will be fully integrated, allowing for multiple shared spaces and a highly efficient design,” Schulman says. “And by consolidating the varsity sport components in one area, the northern zone is freed up for dramatic enhancements to health and fitness, as well as classrooms, group exercise studios, demonstration kitchens, and even a juice bar.  The space will be truly multi-purpose and designed very much with student engagement in mind.

“I think we’ve arrived at the right place with a project that is achievable, right-sized for UVM and Vermont, and capable of gaining the philanthropic support needed to make it happen.” 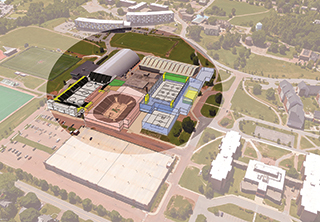