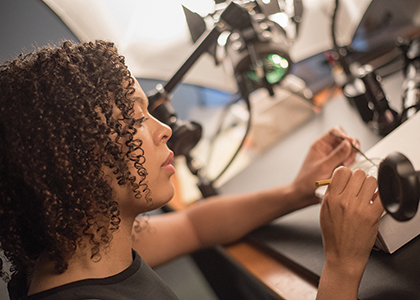 Lily Sargeant ’17 was among the undergrads working with Professor Ingi Agnarsson. Photograph by Joshua Brown

Four UVM undergrads and their professor have discovered fifteen new species of “smiley-faced” spiders—and named them after, among others, David Attenborough, Barack Obama, Michelle Obama, Leonardo DiCaprio, and Vermont Senator Bernie Sanders. You won’t find them in Washington, D.C., Hollywood, or Vermont—but on Caribbean islands and other southern spots you might now get a glimpse of Spintharus davidattenboroughi, S. barackobamai, S. michelleobamaae, and S. berniesandersi as well as S. davidbowiei and S. leonardodicaprioi.

“This was an undergraduate research project,” says Ingi Agnarsson, a spider expert and professor in the biology department who guided the students on the new study. “In naming these spiders, the students and I wanted to honor people who stood up for both human rights and warned about climate change—leaders and artists who promoted sensible approaches for a better world.” Their study, published in the Zoological Journal of the Linnean Society, drew international media attention from the Washington Post to Time Magazine.

Until now, the beautiful yellow “smiley-faced spiders” in the genus Spintharus—named for a smiley face pattern on their abdomens—has been thought to have one widespread species “from northern North America down to northern Brazil,” Agnarsson says. However, when a research team from the Caribbean Biogeography Project (“CarBio”)—spearheaded by UVM’s Agnarsson and Greta Binford at Lewis & Clark College—collected spiders from Jamaica, Cuba, the Dominican Republic, Puerto Rico, the Lesser Antilles, Florida, South Carolina, Costa Rica, Mexico, and Colombia—they discovered that what was thought to be one widespread species was actually many endemic species. Using CarBio genetic work, and the Vermont students’ painstaking photography and lab work, the team—with support from the National Science Foundation—was able to identify and formally describe fifteen new species. “And if we keep looking, we’re sure there are more,” Agnarsson says.

Each student who helped describe the spiders also got to name a few of them—and some were named for beloved family members. “But we all named the Bernie Sanders spider,” says Lily Sargeant ’16, one of the students who helped with the project, and who now works at UVM with Vermont Veteran Services. “Our time on this earth is limited,” she says. “But I think that ideas are not that way. It is my hope that through naming that spider after Bernie we can remember the ideas that he has at this pivotal point in the life of our nation.” Ben Chomitz ’16, another of the student researchers, put it this way: “That spider species will be named after Bernie forever.”

For Chloe Van Patten ’16, her naming process goes back to what she calls a high school “obsession” with actor Leonardo DiCaprio. “I’m over my crush, but now that he’s involved in environmental issues, I love him even more. So I named a spider after him hoping that if he read our study,” says the recent UVM graduate now living in California, “he might go out to dinner with me and talk about climate change.”

The Caribbean region has long been known to scientists as a major global hotspot for biological diversity. The leading spider expert on the Spintharus genus in earlier decades, Herbert W. Levi (1921-2014), had concluded that differences he observed in these spiders across a wide swath of geography represented variation within one species. But newer molecular techniques deployed by the project’s leaders, Agnarsson and Binford, show otherwise. “These are cryptic species,” Agnarsson says. “As Dr. Levi’s work clearly showed, they’re hard to tell apart by looking at them.” But the DNA data are clear: these spiders have not been interbreeding—exchanging genes—for millions of years. “Thoughts about conservation change dramatically when you go from having a common, widespread species to an endemic on, say, Jamaica that has very specific conservation needs,” Agnarsson says.

“All of a sudden we have fifteen-fold increase in diversity in this particular group—just because we did a detailed study,” says Agnarsson. “That tells us something about biodiversity in general. The more we look, the more we discover.” Conservation biology, the team notes, fundamentally depends on good taxonomy, since preserving one widespread species is a radically different task than protecting the precise habitat of a genetically isolated, local species.

The UVM students got started on this project in Agnarsson’s field zoology class—collecting insects and spiders in Vermont and watching David Attenborough videos. “Ingi shared with the class that Attenborough was one of his heroes and got him interested in arthropods,” says Sargeant, “and now Ingi is one of our heroes. He’s an amazing teacher who can make studying the natural world unbelievably riveting.”

Through the class, Agnarsson recruited undergrads who wanted to dig deeper into spider taxonomy. Austin Dziki ’15 worked with Agnarsson for several years, helping to uncover the complex story that was emerging from the DNA evidence—and then he and the other students spent long hours “looking at spider genitalia,” says Sargeant.

A 2015 paper co-authored by Dziki and Agnarsson started to tell the revised thirty-million-year-long history of smiley-faced spiders—but the hard work of fully describing, and then formally naming, the species lay ahead. “Dissecting the genitalia and taking careful measurements can be one of the best ways to distinguish species,” Sargeant says. This microscope work was combined with photography in Agnarsson’s laboratory in UVM’s Marsh Life Science building: using a macro lens under bright lights, the students made “photo stacks” of up to fifty sliced images, combined into one composite photo that shows the whole spider in sharp focus.

Though the students’ lab work was often tedious and technical, they brought deeply personal and cultural perspectives to the naming of the spiders. “I’m a second-generation American and I’m black,” says Lily Sargeant. “It is through a diversity of perspectives that we achieve innovation in science and I appreciate how much the Obamas value diversity.” Perhaps the Obamas now value Spintharus barackobamai (the tenth organism named after the former president) and Spintharus michelleobamaae (the first organism named in her honor).

“Here’s the thing,” says UVM’s Ingi Agnarsson—an associate professor and co-curator of the university’s Vermont Natural History Museum, as well as a research associate at the Smithsonian’s National Museum of Natural History—“we need to understand and protect biodiversity in its many forms, and we felt compelled to recognize leaders that understand this.”