The art of discovering an artwork’s origins 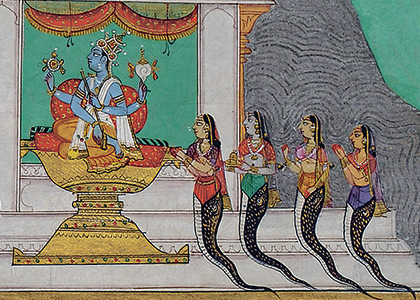 “Krishna Quells Kalia to the Acclaim of the Gods” is among the paintings that professor and leading Indian art historian John Seyller analyzes in Deccani Paintings, Drawings and Manuscripts in the Jagdish and Kamla Mittal Museum of Indian Art, one of multiple volumes he has written about the collection. (detail)

An art historian brings multiple skills to the study of a painting created nearly five hundred years in the past and half-a-world away. The not-so-simple ability to see extremely well stands squarely at the core of these skills. Accordingly, John Seyller, UVM professor of art history and one of the world’s foremost experts of Indian painting, always travels with a 10x magnifying glass tucked into his bag.

While the vibrant color, swirling forms, and historic/religious stories depicted in paintings of this era in Indian history are what immediately draw the eye, Seyller’s pioneering scholarly work in Mughal painting has often involved looking beyond such things to tiny inscriptions scrawled in Persian along the margins, on the backs of pieces, or even under layers of paint. The UVM professor’s discovery, interpretation, and analysis of these largely overlooked notes in the 1990s have significantly altered previous notions and understanding of Mughal Indian painting.

The inscriptions were instructions to the artists, in essence, Seyller says, unlocking the circumstances surrounding the creations of the paintings. “They are work orders in many ways,” he says. “They tell you when it should be made, how many days you should spend on it, with whom you should collaborate. So it broke down the sense of the patron more or less telling the artist what to do, and replaced it with an understanding of a very large workshop operation that had its own mechanisms for the production of these paintings.”

A prolific author, Seyller curated the exhibit and wrote the in-depth catalog for The Adventures of Hamza: Painting and Storytelling in Mughal India, which opened at the Smithsonian’s Arthur M. Sackler Gallery in 2002. In recent years Seyller has annually produced a book in collaboration with distinguished Hyderabad-based artist and collector Jagdish Mittal. Together they have already published five volumes; a sixth is in production; and a seventh is in its initial stage.

“John has been intensely productive as a scholar, and there is no indication that this will ever willingly cease. His publications are eagerly awaited by those interested in the arts of India and the Islamic world,” says Milo Beach, Indian art historian and former director of the Sackler Gallery. “The impact of his work has transformed the field and no scholar or student of Indian painting, whether in the States, Europe, or Asia, can proceed seriously without his publications at hand.”

GIVING A CULTURE ITS DUE

““I think I was born to be an art historian in so many ways,” Seyller says, sitting in his fifth-floor Williams Hall office. The north wall’s shelves are packed with books on Asian art; the west windows look out across Burlington to Lake Champlain and the Adirondacks beyond. Reflecting on his childhood in suburban Chicago, Seyller says he was drawn to the study of the past from an early age—“sports and military history initially, then just everything. I couldn’t get enough.” Frequent trips to the Art Institute of Chicago helped kindle his interest in art.

Seyller headed west for college to the University of California, Berkeley, but almost immediately felt the urge to travel abroad. He dropped out, traveled around Europe—“because that’s what you did back then.” Hitching across Europe and the Middle East for six months clarified Seyller’s academic path. Determined to study art and architectural history, he returned to Berkeley. There he completed his bachelor’s and master’s before going on to earn his doctorate at Harvard.

Initially, Seyller’s focus was on Western modern art, in particular, the early 20th-century expressionist movement of Fauvism. A combination of mentoring professors and his own inclination turned his view to the East. “Fauvist art has very bold colors, strong things, and is kind of primal in a way. Indian art has a lot of those qualities as well. It was a natural direction for me.” This attraction to something far outside his own experience was characteristic of Seyller, as well. “I’m by nature that way,” he says. “I don’t know why, but I always was—from the ground up. I like working in foreign things. I enjoy the discovery of it.”

He finds that the students who enroll in his classes in Asian art are similarly inclined. Dusting off a pop-culture reference from his youth, Seyller calls them “’Uncola types.’ They aren’t straight down the middle.”

Teaching in an age when cross-cultural understanding and respect are sorely tested and often lacking, Seyller’s classes in Islamic art, in particular, are an opportunity to shed light on foreign cultures. Most of his students come into the course with no knowledge of Islam. “I teach it straight up,” he says. “I don’t excuse it. I don’t prosecute it. I just give each culture its due. All I can say is that these civilizations across the whole world have been doing fabulous, serious things for many years, many centuries longer than we have. So this kind of myopia we have where it begins and ends with New York or Berlin, it’s certainly not true and they get that.”

Far beyond simply getting it, some of Seyller’s top students have found their calling in the professor’s classes. Bronwen Gulkis ’11, nearing completion of her Ph.D. in art history at Harvard, traces her interest in the field to a sophomore-year course with Seyller. “He pushed me to expand my sense of who I was as a person and what I could accomplish,” she says. “At the time I began working with Professor Seyller, I didn’t think I would ever get a chance to travel in Asia, learn a non-European language, or find a career I truly identified with. He not only introduced me to South Asian art as a field, but has served as a role model of a successful scholar.”

Every professor’s teaching calendar is bound to the rhythm of semesters. John Seyller’s scholarly calendar is another matter, writing intensely throughout the year and resetting at the beginning of each August, when he travels to Hyderabad, India, for three weeks of twelve-hour-a-day immersion in the rich collection of the Jagdish and Kamla Mittal Museum of Indian Art.

Seyller has both a close colleague and friend in the museum’s founder, Jagdish Mittal. At age ninety, the Indian artist/historian/collector brings the tremendous knowledge of all of his professional pursuits, as well as the cultural wisdom of an endlessly inquisitive mind to their collaborative work, Seyller says.

With that 10x magnifying glass in hand, Seyller scrutinizes hundreds of paintings in Hyderabad and delves ever more deeply into them through his conversations with Mittal. “I have learnt from John the importance of working long hours so that there is consistency and depth in one’s writing,” Mittal writes via email. “While researching and actual writing, we both have very cordial give and take attitude, instead of confrontation. John supports his arguments with comparative images from his data base. When our ideas differed we came to conclusion after patiently discussing the matter.”

The work begun during those weeks in India continues throughout the year back in Vermont, where Seyller pores over images on his computer and writes with a discipline that draws him to his desk 365 days a year.

In his office, Seyller scrolls through images of some of the highly abstracted flora depicted in paintings he is currently studying. He identifies the plants one by one, comparing them to photographs of actual Indian trees and flowers. He pauses for a moment to marvel at the creative powers of Indian artists who transformed images rooted in the natural world into such visionary, evocative images. Then it is back to work. Staring intently at the screen, he says with a half-smile, “I’m nothing, if not dogged.”