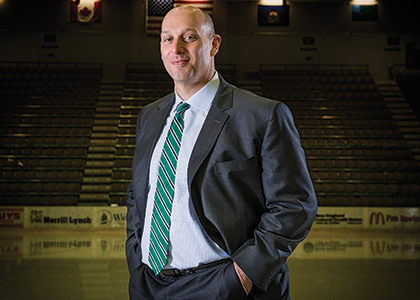 Summer 1989, freshly graduated from UVM, Jeff Schulman is living as a guest in the Phi Delta Theta house, where he hobbles down the hallway with a fractured foot to take a call on the fraternity’s only phone. On the other end of the line is Boston Globe reporter Kevin Dupont, who wants to know what the Catamount defenseman thinks about being selected earlier in the day by the Boston Bruins in the NHL supplemental draft.

Unaware the draft even occurred, Schulman ’89 G ’02 is convinced a friend is playing a prank. Realizing otherwise, he tells the reporter he isn’t sure what his plans are after graduation. In reality, Schulman had no intention of toiling in minor league hockey. He had already landed a coveted spot as a Bushnell Intern with the Eastern College Athletic Conference (ECAC), boosted by a recommendation from then UVM athletic director Denny Lambert ’54.

“It was pretty funny at that time,” recalls Schulman, who had broken his foot playing pickup basketball a few weeks earlier. “On my first day of work with the ECAC, the conference commissioner showed me an article in the Globe that said I was the only no-show at Bruins’ training camp and locked in a contract dispute.  I laughed and explained the situation. I considered playing briefly, but I was ready to start my career in athletic administration, and at the time I was very fortunate to land one of the few opportunities for young people to get administrative experience in intercollegiate athletics.”

The Bruins’ loss was UVM’s gain, as the ECAC experience would serve as a launching pad for Schulman’s career, which took a significant step on April 6 when President Tom Sullivan introduced him as the university’s ninth  director of athletics. The announcement was well received by Catamount Nation, many of whom felt Schulman was a worthy heir to his three predecessors and mentors: Lambert (1973-1992); Rick Farnham ’69 (1992-2003); and Robert Corran (2003-2016).

“One of the things I am most proud of is that I’m able to follow in the footsteps of three athletic directors who have been such outstanding friends and mentors and who have led this department for forty-three years with an incredible level of professionalism and integrity,” says Schulman. “While I’ll certainly have my own leadership style, I’ll draw often on what I’ve learned over the years from Denny, Rick, and Bob. ”

If Schulman’s performance since returning to his alma mater in 1993 as assistant athletic director is any indicator, the next chapter for UVM Athletics should be a fruitful one. Schulman, who has served as senior associate athletic director for the past twelve years, has overseen the department’s financial operations and worked with Corran to transform the Archie Post Athletic Complex, including Moulton Winder Field; the Frank H. Livak Track & Field Facility; and Virtue Field. Phase II of the Virtue Field project starts this summer with the addition of permanent seating for 2,500, a press box and hospitality space, and an events plaza connecting all three facilities at the Post Complex.

Growing up in Buffalo, New York, Schulman spent much of his early years at a nearby middle school watching older kids play sports. He loved the competition, but also found himself intrigued by the manner in which the games and events were organized.  He started running the clock at games and worked as a ball boy whenever possible. “I’m not sure why, but I was just really interested in watching how athletic events were being managed,” he says.

Schulman’s intrigue with sports management grew during his years as a UVM student-athlete. His friends used to joke that if they couldn’t find him, all they had to do was check the UVM athletic schedule to know his whereabouts. Schulman recalls being the only fan at a baseball game on a frigid day at Centennial Field when Rick Farnham asked if he’d run the scoreboard and serve as the public address announcer. He gladly accepted and became a regular fixture in the Centennial press box.

Instead of rooming with fellow varsity athletes on East Campus, Schulman opted for Chittenden-Buckham-Wills residence halls, based on a recommendation from his cousin but to the dismay of his coaches. “It was one of the best decisions I ever made, because it exposed me to a whole group of classmates who weren’t athletes,” says Schulman, a political science major who was inducted into the UVM Boulder Society as a senior. “It’s an experience that stuck with me and informed one of my top priorities as AD which is to make sure our student-athletes are fully integrated into the student body as a whole.”

On the ice, Schulman excelled as a 6-foot-3, 210-pound defenseman for a hockey team that was starting to come into its own nationally.

Named by the Burlington Free Press to it’s All Decade Team, a major glory-days moment came at the Boston Garden in an upset win over eventual national champion Harvard in the 1989 ECAC Semifinals. The Cats were down 2-0 with nine minutes to go in the game when Schulman ripped in a shot from the blue line. “He really cranked that thing,” Harvard Coach Bill Cleary told the Harvard Crimson. “Holy smokes that was a tough shot.” Then, with less than three minutes left in regulation, Marc LeBruex ’89, tucked the tying shot into the corner of the net. In overtime, Schulman assisted on David Browne’s ’91 rebound goal that finished off the dramatic rally.

Today, taking charge of UVM Athletics, Schulman has definite goals for a program he’s convinced can take winning to new heights without surrendering its academic soul.

“This has never been the kind of institution that is willing to compromise its integrity, academically or otherwise, for the sake of competitive success, and I don’t think we need to,” he says. “I intend  to maintain an emphasis on academics and the student-athlete experience while at the same time ratcheting up the competitive level across the board. We can win championships and have top GPAs and graduation rates.”

Schulman is well aware that facility improvements are critical to achieving this vision. Hardly a day goes by without someone asking him if he thinks he can facilitate the construction of a new events center either on campus or through a local partnership.

“One of my top priorities is to work with President Sullivan and our Board of Trustees to vet the different options for a new events center and chart a realistic course for us to move forward as quickly as possible.  This will happen at the same time we are developing facility plans to meet the recreation, fitness, and wellness needs of the entire campus,” says Schulman. “By necessity, I anticipate having a heavy external focus and I’m confident that we have a critical mass of alumni, donors, and passionate fans who want to support UVM athletics by helping make these facility improvements a reality.”

Well aware of the big job ahead, Schulman says he’s most thankful for the support of his wife, Deb Lichtenfeld ’95, director of development for UVM Hillel, and their children, Theodore, Gabriella, and Mara. “I’m incredibly fortunate that my family enjoys being around UVM Athletics as much as I do.  It’s obviously  a very time-consuming job,” he says. “For us, it really is a family affair.”