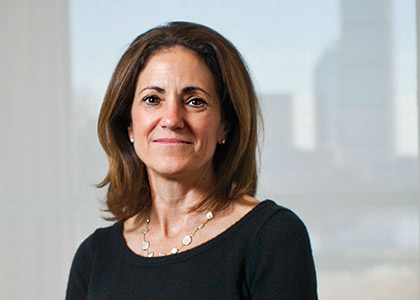 In February, Cynthia Barnhart was appointed chancellor of the Massachusetts Institute of Technology, the first woman to fill this post. You wouldn’t be alone in asking: just what is a chancellor? “That’s always the first question!” she says with a laugh. “The chancellor at MIT is all things students,” she explains. Following her recent role as MIT’s associate dean of engineering, the new job is a big change for Barnhart and one she relishes. As chancellor, she’s focusing on several major issues in higher education—sexual assault; the pressures of academic life in our age of intense digital connectivity; and the student facilities of the future, residence halls to classrooms; among others.

Barnhart studied civil engineering at UVM and then completed her master’s and doctorate at MIT. Across the past twenty years, she’s worked as professor of civil engineering and director of Transportation@MIT, a program involving hundreds of MIT faculty working on design solutions addressing the environmental impacts of transportation— like airplanes that could use seventy percent less fuel than current models.

Barnhart see engineers at the center of societal advance from creating renewable energy to increasing the efficiency of the U.S. airline network to bringing clean water to developing countries.  “That’s a large part of why we see an increasing number of students who are majoring in engineering,” she says, “they understand that it’s not just the pocket protector-wearing nerd who gets into it. It’s for people who want to make the world a better place.”

Recently appointed to UVM’s Board of Trustees, Barnhart is pleased to have a hand in helping her alma mater move forward on plans to construct a new world-class science and technology building. “It’s so important, when pushing the frontiers, to provide people with the opportunity to do their research in a state-of-the-art facility—that allows them to work closely together, across disciplines, to think differently in addressing some of the world’s toughest challenges,” she says.

Neither of Barnhart’s parents went to college, but they saw that all of the kids in their Barre, Vermont family—Cynthia, her sister Kathy ’80, and brother Richard ’82—earned their degrees from the state university. “My parents valued education a lot,” she says. “UVM was a great launching pad for all three of us.”

As a woman entering engineering in the late 1970s Barnhart didn’t feel like a pioneer, she says, but she did stand out. “UVM had a very supportive culture,” she says, “but I did my studying with men, because most of the class was men.” When she wasn’t studying, she enjoyed Friday happy hour at the fabled Chickenbone, sandwiches at Carbur’s, and she and her now-husband Mark Baribeau ’81 had season passes to Sugarbush.“I was studious and engineering isn’t easy, but I didn’t have a million activities, so I had time to relax,” she says, “and by the time I was a senior I’d figured out how to arrange my schedule so I could take days off to go skiing.”