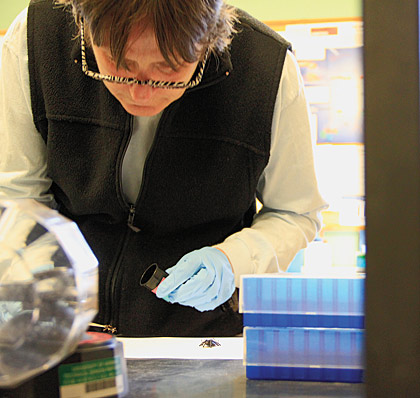 In the spring of 1835, Charles Darwin was bitten in Argentina by a “great wingless black bug,” he wrote in his diary.  “It is most disgusting to feel soft wingless insects, about an inch long, crawling over one’s body,” Darwin wrote, “before sucking they are quite thin, but afterwards round & bloated with blood.”

In all likelihood, Darwin’s nighttime visitor was a member of Reduviid family of insects—the so-called kissing bugs because of their habit of biting people around the mouth while they sleep.

From this attack, some infectious disease experts have speculated, the famed naturalist might have contracted Chagas disease, a parasite-borne illness carried by kissing bugs, that today afflicts millions of people in Central and South America. Darwin’s bite may have led, ultimately, to his death from heart problems.

This hypothesis has been contested for decades, but if Darwin had experienced this bug attack in the United States, no one would have made such a speculation, since Chagas disease is almost unheard of in the nation.

That could change, new research shows.

Lori Stevens, a biologist at the University of Vermont, and her colleagues, found that 38 percent of the kissing bugs they collected in Arizona and California contained human blood.

This upends the previous understanding of insect experts and doctors that the eleven species of kissing bugs that occur in the United States don’t regularly feed on people.

“This finding was totally unexpected,” says Dr. Stephen Klotz, head of the infectious diseases department at the University of Arizona medical school and a co-author on the study.

And more than 50 percent of the bugs the research team collected also carried Trypanosoma cruzi, the parasite that causes Chagas disease.

Their study was reported in the March 14 online edition of the journal Emerging Infectious Diseases.

“The basic message is that the bug is out there, and it’s feeding on humans, and carries the parasite,” says Stevens, “so there may be greater potential for humans to have the disease in the United States than previously thought.”

So far, little of that potential has been realized. Only seven cases of Chagas disease transmitted by kissing bugs have been documented in the United States.

“We think the actual transmission is higher than the seven cases we have identified,” says Patricia Dorn, an expert on Chagas disease at Loyola University and co-author on the new study, “but, even with these findings, we think the transmission of Chagas—of the T. cruzi parasite—is still very low in the U.S.”

But with a warming climate that rate might rise.

Dorn and Klotz both emphasize that risk of severe allergic reactions to the bug’s saliva is currently a greater problem than contracting Chagas disease. The team hopes their new work, funded by the National Science Foundation and the National Institutes of Health, will “raise awareness among physicians and health care workers,” Dorn says, about the risks of both allergic reactions and Chagas disease from kissing bugs.

“Chagas is a cryptic disease. It doesn’t announce itself,” say’s UVM’s Lori Stevens. The parasite can trigger an acute phase of the disease that may have no symptoms or may include fever, swelling of one eye, swelling around the bite, and general ill feelings. In other words, it can look like many other minor illnesses.

Then the disease often goes into remission, only to appear years later as much more serious illness, including life-threatening digestive and heart problems. Some eight to ten million people in Mexico, Central America, and South America have Chagas disease—making it the “most serious infectious parasitical disease in the Americas,” Stevens says. The World Bank estimates that Chagas causes 23,000 deaths each year. Yet it is one of world’s most neglected tropical diseases, mostly affecting the rural poor, and little studied compared to other major diseases.

It’s not fully clear why Chagas disease hasn’t established itself in the United States. “There are two leading theories,” Klotz says. One is that housing stock in Central America is different than in the United States. There, thatched roofs, stick and mud construction and dirt floors provide good habitat for local kissing bug species. In contrast, U.S. houses tend to have concrete basements, screened doors and windows, and tighter construction.

The other reason may have to with the bathroom behavior of different species of kissing bugs. “We like to joke the bugs have better manners in the U.S.,” says Dorn. The primary method of transmitting the disease is through the insect’s feces. The species that have made Chagas endemic to Central and South America tend to defecate while they are having their blood meal.

This fecal matter can then enter the bite wound or mucus membranes easily, transmitting T. cruzi parasite to the bloodstream. In contrast, North American species “tend to feed, leave the host, and then defecate later,” says Dorn, lowering the risk of transmission.
But could those more-dangerous kissing bug species move north as the climate warms?

“We know the bugs are already across the bottom two-thirds of the U.S., so the bugs are here, the parasites are here. Very likely with climate change they will shift farther north and the range of some species will extend,” she says.

This problem may be compounded by increasing numbers of houses in the U.S. being built in remote areas—such as the mountainous areas around southwest cities like Tucson and San Diego — “places inhabited by packrats, for example, that are the natural hosts of these bugs,” says Klotz.

“The bugs are attracted by the lights at night,” Klotz says. “They’ll crawl under a door and once they are there, they are such incredible parasitical bugs—they’ll come find you or your pets.”

But prevention is fairly easy, Stevens says. “If you’re camping, make sure you close in spaces at night,” she says. “In Vermont, it’s not such a big deal, but in Arizona, if you sleep with the windows open, you need to put screens in. If you take precautions to keep the bugs out, you can prevent getting the infection quite easily,” she says.