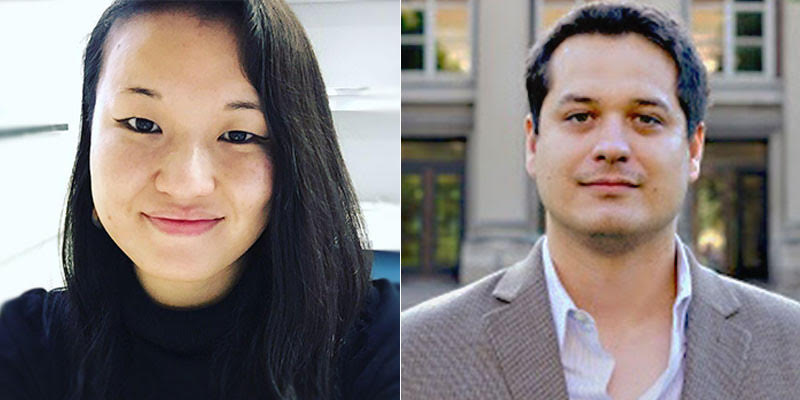 Ou Yangguang and David Punihaole will join the UVM Department of Chemistry as assistant professors this fall.

Dr. Yangguang Researches How the Brain Works and Disorders of the Mind

During her sophomore year at Florida State University, Dr. Yangguang was majoring in chemistry and biochemistry as she was unsure if she wanted to go on to medical school or graduate school.

While looking for a research opportunity, she came across the Kabbaj Lab, led by Mohamed Kabbaj, Ph.D., in the FSU College of Medicine. That’s where she was first introduced to the hippocampus, the part of the brain responsible for learning and memory.

“Understanding how the brain region works has been my passion for more than a decade,” she says.

Her research is focused on making small carbon fiber sensors, which are one-tenth in diameter compared to a strand of hair. The small size is what makes the sensors effective.

“The reason it’s small is that we don’t want to induce inflammation to tissue or organs for studies,” she says. “We’re working on modifying the surface of carbon, and the reason is two-fold. First, we want to detect molecules in the brain that are not traditionally electroactive. Second, we want to modify the carbon so the carbon surface will interact with a wide range of chemicals.”

From there, the next step is to optimize the sensors for size, speed, sensitivity, and selectivity to match measurements and complexities in the brain.

Ultimately, the goal of her research is to make implantable devices for medical researchers to diagnose PTSD, autism, and depression. Currently, disorders of mind rely on subjective questionnaires rather than chemical tests, Dr. Yangguang says.

“Eventually, in humans, we want to implant a device that can give quantitative measurements about protein, neuropeptides, serotonin, and dopamine as a living organism is behaving,” she says. “That way, we can understand what chemical changes are happening in real-time.”

Dr. Yangguang says she was drawn to UVM based on the quality of research happening at the University, as well as the emphasis placed on both research and teaching.

“I’m looking forward to sharing with students the power of analytical thinking and a thirst for knowledge,” she says. “I also want to continue to explore my passion for understanding ourselves, including our minds and how our minds work.”

Optical microscopes that are used in high school science labs, for example, have been around for hundreds of years. The way we use those microscopes hasn’t really changed, he explains.  In the 1600s, microscopes were used to look at microorganisms and insects. Today, researchers use them to look at large proteins and protein complexes.

The Raman Effect, first discovered by Dr. C.V. Raman in 1928, is used for generating detailed chemical images. What motivates Raman chemical imaging is a technique based on a phenomenon called Raman scattering. That’s when you take a laser and excite vibrations in molecules. The molecules scatter the laser light at certain characteristic frequencies that correspond to particular vibration, he says.

“If you think about it, to truly understand biology and to truly understand the function of that protein, it’s not enough to know or visualize where protein is in a cell at a particular point in time. What you need to know is how that protein will interact with its environment,” he says. “That’s a question that chemists are fundamentally interested in. It’s a necessary question to answer if you want to develop insights into the developing molecular understanding of human diseases or to develop therapies to treat them.”

In the first seven years after its discovery, the Raman Effect was the subject of more than 700 papers in the scientific literature, mostly by physicists who were using the technique to study the vibration and rotation of molecules and relating those phenomena to the molecular structure. Eventually, scientists’ interest waned.

But Raman imaging gained more traction over the past 10 years as scientists in the field now use it to analyze tumors, monitor drug delivery, and look at cell metabolism, Dr. Punihaole says.

“Despite these rapid and impressive developments, we as a community somehow forgot that these vibrations that we are exciting are telling us something about how chemicals interact with their environment,” he says. “My expertise is extracting rich chemical information encoded in chemical variants.  As I start my faculty career, my goal is to bring this information back into chemical applications. It’s no longer just imaging things in time and space. Instead, Raman imaging would add a third dimension. The technique is in its infancy, but we know we can get this information.”

When Dr. Punihaole arrives at UVM for the fall semester, he will be working in a lab previously used by his mentor—UVM lecturer David Pratt, Ph.D.—whom Punihaole studied with at the University of Pittsburgh.

“When I start teaching this fall, I hope to convey that regardless of what students are interested in, chemistry probably plays an important role in terms of helping them understand the world around them,” he says. “I’m looking forward to sharing how chemistry impacts their thoughts, views, and lives.”