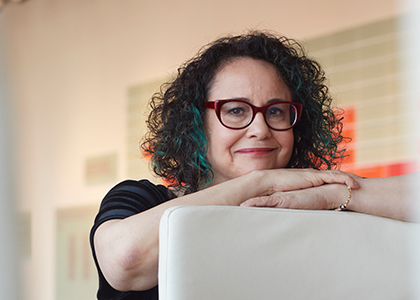 Managing editor and co-host of WNYC’s On the Media Brooke Gladstone and her sidekick Bob Garfield draw an audience of 1.2 million to the weekly radio show, a staple for many National Public Radio listeners. Along the way, she’s won two Peabody Awards, a National Press Club Award, and an Overseas Press Club Award.

Given daily accusations of fake news and dishonest reporting from on high, is it a good time to be managing editor of a program called On the Media? “I’ve had friends who say, ‘Doesn’t it feel like you spent twenty-five years preparing for this moment, so you can be effective and relevant and maybe make a difference?’ It’s an interesting time to be a reporter,” Gladstone says.

As a UVM theatre major, Gladstone spent nearly every waking hour of her college career in a renovated gymnasium newly named Royall Tyler Theatre. She honed the art of storytelling in classes, in performing, and in watching others perform.

“The sense of pacing,” the need to be “specific and concrete” in acting is much like writing an effective news story or conducting an engaging interview, she says. “It requires crafting; UVM helped me with that.”

Classmate and fellow thespian David Godkin ’78 remembers Gladstone, whose family moved to Vermont from Long Island when she was in high school, as “just brilliant … We knew she was going places, we just didn’t know where.”

You never know where waitressing might lead. After graduation, Gladstone accepted an invitation to room with a classmate in Washington, D.C., and found a restaurant job to pay the rent. A customer put her onto her first not-particularly-glamorous freelance writing assignment. “Initially it was real bottom feeding,” she says.

But Gladstone marshalled her clips and began to build a career. Her big break came in 1986 when Scott Simon, then a rising talent on a new NPR show called Weekend Edition, asked her to fill in on the program while the show’s editor was away.

That foot in the door would lead to Gladstone becoming Simon’s senior editor, then senior editor of All Things Considered, and a three-year stint in NPR’s Moscow bureau.

After returning to the United States, she reported on the media beat for six years, overcoming an initial reluctance to narrow her focus.

Gladstone’s work earned the attention of New York’s flagship public radio station, WNYC, which wanted her to relaunch a failing show called On the Media, which had promise but was under-resourced and lacked an editor.

She agreed in 2000, but on her terms. “I realized, ‘well, if I am more-or-less destined, or doomed, to cover media, then I will define media as broadly as I possibly can.’”

Not content with the rigors of producing a weekly radio program, Gladstone is also an author, of The Influencing Machine, an acclaimed non-fiction graphic novel on the history of media starring a cartoon version of herself and, most recently, The Trouble with Reality, A Rumination on Moral Panic in Our Time, prompted by President Donald Trump’s electoral victory. The new work counsels both sides of the ideological divide to venture out of their bubbles to at least attempt to understand the other’s reality.  “It isn’t about agreeing,” she says. “It’s just about seeing.”