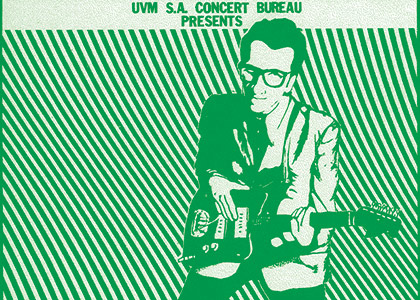 Elvis Costello. Bruce Springsteen. The Grateful Dead. For many students of my generation, these musicians were core to the soundtrack of our college lives. But for the circle of students on the UVM Concert Bureau during that era in the late ’70s they were something more than the tracks we spun endlessly on the turntables in our dorm rooms—they were a significant supplement to our education. Marketing, contracts, collaborative work, seemingly endless logistics, I couldn’t have found a better (or more fun) way to immediately apply the lessons of my business courses.

Last January, I had the opportunity to return to UVM to help judge the “Family Business Case Competition” organized by the Grossman School of Business. Somehow during that return to Burlington I got to talking with a fellow judge about the Concert Bureau days, and the memories began to flood back. When I returned home to Maine, I dug into old files that haven’t been viewed in over thirty-seven  years. These files were filled with paperwork, photos, signed contracts, Western Union offers, posters, backstage passes from the shows we brought to Burlington back in the day, along with original tickets with prices so reasonable, they just made me laugh.

I didn’t start my college experience looking for a schooling in the music business. Like many, I was drawn to UVM by Vermont’s beauty coupled with the academics of a strong biology program. And, like many, my college years would take some turns as I found my way to new interests. Biology gave way to business, which was better in keeping with my future plans of running our multi-generational family business here in Lewiston, Maine. I was fortunate to have a suitemate at the Living Learning Center be on the Concert Bureau which led me to get involved. I became treasurer my sophomore year and Chairman my junior and senior years.

There was a “perfect storm” of great bands touring during the mid- to late-seventies. Record Companies strongly encouraged bands to tour in order to boost record sales, and our UVM Concert Bureau took advantage of this ripe environment by bringing top musicians and bands to campus. My predecessors, such as Staige Davis ’76 and Steve Lane ’78, had built a strong reputation for putting on solid, well-executed shows and handling big-time acts, such as Bob Dylan’s Rolling Thunder Review Tour and Jefferson Starship. Then director of student activities Dave Nestor and dean of students Keith Miser, along with our Student Government Association, put tremendous faith in us to manage the large budgets and potentially daunting responsibilities of these big shows. Additionally, we had Burlington, a well-placed stop on Interstate 89, between Boston and Montreal for a band looking to add a date and link up a tour. Relatively humble Patrick Gymnasium, with its 3,500-4,200 seats, was the best venue in the region.

And so it was that we were able to bring The Grateful Dead, Bruce Springsteen on his “Darkness on the Edge of Town” tour, and Elvis Costello on his first American tour when many were trying to figure out who this “new Elvis” might be when we’d just lost the “old Elvis.” The names kept going—Little Feat, Van Morrison, Bonnie Raitt, Charlie Daniels Band with Pure Prairie League, George Benson, Pousette-Dart Band with David Bromberg. Southside Johnny and the Asbury Jukes for a concert-dance in Patrick Gym—for a mere $3.50 admission. Then there was an obscure band called Sea Level. Who remembers them? I’m not sure I can recall any of their songs, but that small concert at Ira Allen became most memorable, because it was the night we almost burnt down the chapel. Our UVM electrician, John Lincoln, saw smoke coming from the antiquated and severely under-powered electrical service at the chapel. We had to have the band perform the show without most of their special stage lighting in order to prevent a disaster.

As I leafed through my file of yellowed paperwork, more memories returned. There was the original signed contract for the Grateful Dead show on May 6, 1978, perilously close to finals week for those of us who were balancing the role of part-time concert promoters with full-time students. Phil Lesh’s signature sealed the deal on the document: “One show, beginning at 8:00 p.m. and ending at 12:00 midnight, including intermission. Wage agreed upon: $25,000 plus $5,000 for sound and lights.”

Most tickets for the Dead show were reserved for students, and we held just five hundred tickets for the general public. I fielded a call from a lawyer in California, desperate for a ticket, claiming he’d never missed a live Dead performance. In our pre-concert building sweep we swept dedicated Deadheads out of a number of places, including Patrick Gym’s ventilation ducts, a full 24 hours before the show. Our great student security team received many offers of, shall we say, “unique and personal” goods and services, if only they would look the other way and let a ticketless fan through the turnstile. When the show was over, the contract required us to transport the Dead to their next show, which was at Syracuse University, via limousine. Back in those days, there were no limousines to be found in Burlington, so a pair of Lincoln Town Cars was the best we could muster. A couple of my L/L suitemates had the honor of chauffeuring the Grateful Dead through the night to their next show. What an experience they had!

The fervor for the Springsteen show the next fall would rival the Dead performance. Initially, we weighed a very tempting offer—the chance to host the opening show of the Darkness on the Edge of Town tour. But the date would have fallen in summer with most of our students gone and our Concert Bureau scattered. Dave Nestor asked us to weigh the possibility, but we decided that we had to decline and he respected our judgment. Ultimately, we landed Springsteen in Burlington that November for a sold-out show. With my mom and dad on campus for a parent’s weekend, I was proud to give them a glimpse backstage before the show. They wondered what “all the fuss” was over this guy they amused themselves by referring to as “Bruce Stringbean.” The morning after the concert, I had the rare chance to meet Springsteen over breakfast at his hotel downtown. He was gracious, down to earth, a true showman and every bit the “regular guy” he has always seemed to be.

For all the great shows our Concert Bureau was able to share with the UVM community, I seldom saw an encore or even the second half of a concert. We’d be in a side room or backstage figuring the house, preparing to settle the contract, taking care of business. Not complaining, I wouldn’t trade that experience for the world. I’d have many other chances later in life to see Bruce and the band tear through “Rosalita,” but on that night thirty-seven years ago the most important thing was making sure The Boss got paid, and the UVM Concert Bureau produced another “great show” at the Patrick Gym.