is research and teaching are focused at the intersections of ecology, culture, identity, religion, media, philosophy, and the creative arts. His books include Claiming Sacred Ground: Pilgrims and Politics at Glastonbury and Sedona (Indiana University Press, 2001), Ecologies of the Moving Image: Cinema, Affect, and Nature (Wilfrid Laurier University Press, 2013), and the forthcoming Shadowing the Anthropocene: Eco-Realism for Turbulent Times (Punctum Books, 2018). With its historical breadth and theoretical innovation, Ecologies of the Moving Image has been called "capacious and authoritative," "groundbreaking," a "landmark contribution" to the growing field of ecological cultural studies, and the first book of "eco-film-philosophy." Expanding and deepening the eco-philosophy of the earlier book, Shadowing the Anthropocene presents a process-relational "philosophy of life," a philosophy that sees images as part of the battleground in which humans contest the meanings of an increasingly turbulent world.

Professor Ivakhiv has served as president of the Environmental Studies Association of Canada, an executive editor of the Encyclopedia of Religion and Nature (Thoemmes Continuum Press, 2005), and on the editorial boards of several journals including Journal for the Study of Religion, Nature, and Culture, Green Letters, The Journal of Ecocriticism, Environmental Communication, and two book series in the environmental humanities. His articles have been published across numerous disciplines including film and media studies, cultural and literary studies, religious and pilgrimage studies, human geography, and Ukrainian studies. He has been interviewed by popular radio personality Krista Tippett, profiled in a book of "post-Continental" philosophers, and invited to speak on four continents and in over a dozen countries.

Adrian's interdisciplinary background includes work in the humanities, creative arts, and social sciences. Canadian by birth, his research on culture and environment has taken him to late- and post-Soviet Ukraine (including a year in 1989-90 as Canada-USSR Scholar studying the cultural impacts of the Chernobyl nuclear accident), the Carpathian mountains of east central Europe, Cape Breton Island and Haida Gwaii off either coast of Canada, and to other sites of cultural-ecological contestation in the U.S. Southwest, southwest England, Turkey, and elsewhere. In a previous life as a choral conductor and ethno-psych-avant-garage-folk-thrash musician, he performed at monasteries in Egypt, concert stages in Ukraine, and at the Canadian Parliament Buildings in Ottawa (honestly, once). When he isn't teaching, researching, writing, or attending committee meetings (aargh), he makes music, hikes in the Green Mountains, eats Vermont's artisanal cheeses, and reads The Nation, Grist, Spacing, and Ji Magazine. He has lived in Burlington since 2003. From his west-facing window he watches for Champ. 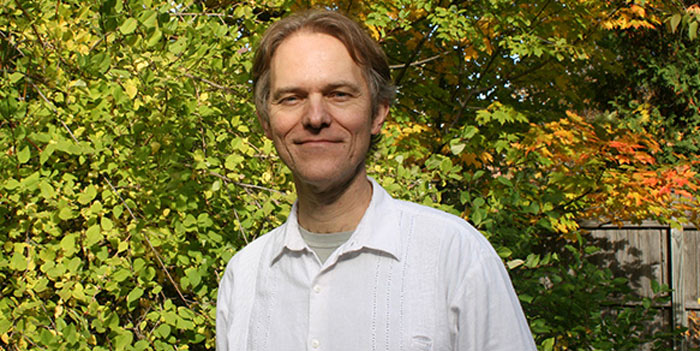