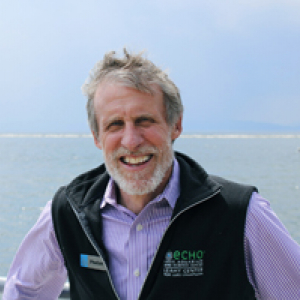 Phelan is Executive Director of ECHO, Leahy Center for Lake Champlain on Burlington’s waterfront. Phelan decided to move from his position at the Museum of Science and Industry in Chicago, the largest science museum in the country, to become executive director of the still unbuilt ECHO. Since his arrival, ECHO has triumphed and failed, resisted change and embraced it. As a leader, you wear it all. After four strategic plans, 51 exhibits, transitioning from 2 staff to today’s 31 dedicated folks that make the magic everyday, and engaging hundreds of community members to chart ECHO’s future. Phelan will share stories and draw insights - all to nurture our change journey.

Phelan loves the outdoors and spends time skiing, cycling, hiking, birding or other outdoor pursuits. He arrived in Burlington in 2002 after 20 years in the museum industry to lead the opening of the new ECHO, Leahy Center for Lake Champlain. He has served in leadership positions at The Museum of Science and Industry in Chicago, The Academy of Natural Sciences in Philadelphia and the New England Aquarium in Boston. In 2008, he received the national Noyce Leadership Award for museum service. He received his B.S. from the Pennsylvania State University and M.S., M.Ed. and Ph.D. from the University of California, Davis. Since arriving in Vermont, he has served as Board Chair of the New England Museum Association and the Burlington Business Association, and chairs the New England Museum Director’s Roundtable. He lives in Burlington with his wife Laura Botte, a sixth grade teacher at Burlington’s Edmund’s Middle School.  He has two boys; Caley who is journalist out of Boulder, CO and Ramsay who is in real estate in Boston, MA

Morning Keynote Address:  Be the Change

If you cannot attend a session you signed up for, please email Professional Development & Training (E-mail Link) with the course name to let us know. Due to heavy volume we will not be sending confirmations of your cancellation.