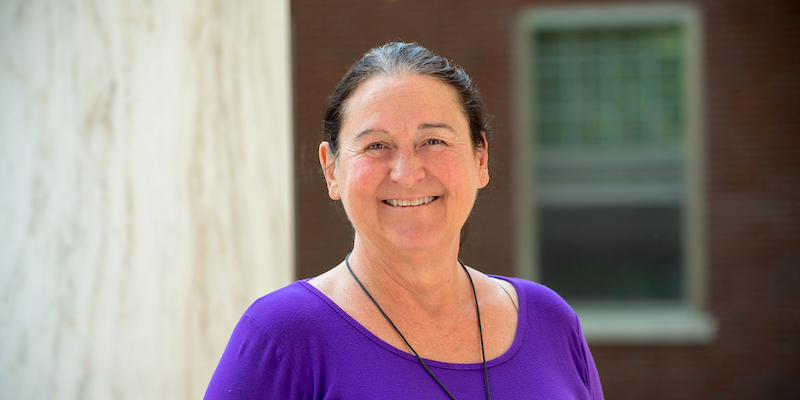 Dr. Lacey Sloan joined the University of Vermont as an associate professor of social work in the fall of 2018.

Lacey Sloan was advocating for survivors of sexual assault long before the #MeToo era.

Arriving at UVM in August 2018, Dr. Sloan specializes in sexual rights, social work in Islamic contexts, and social work education.  She was at the forefront of the rape crisis movement in the 1980s and successfully fought against the practice of polygraphing survivors of sexual assault.

Over the past decade, she has spent much of her time in the Middle East, developing social work education programs and teaching at Qatar University in Qatar and Zayed University in Abu Dhabi.

Last year, she co-authored the second edition of “Multiculturalism and Intersectionality in a Complex World” (Oxford University Press). The new textbook examines imperialism, colonization, capitalism, and the growing economic gap as part of the underlying causes of global inequality and oppression. The book also sheds light on inequality and discrimination based on disabilities, color, caste, tribe, nationality, gender, gender expression, and sexual orientation.

“It’s a critical examination of oppression and what can we do about it,” says Sloan, MSSW, PhD. “The book is to help people understand and critique how we got to this point of racism, homophobia, ableism, nationalism, and how we attempt to go forward.”

Sloan was invited to take the lead the book’s second edition, and recognized it as an opportunity to create a textbook to be used in the Global South, which includes Africa, Central and Latin America, and most of Asia.

“I’ve always wanted to create textbooks that are more accessible and appropriate in the Global South,” she says. “In my experience outside of the United States, I’ve always struggled finding social work textbooks that could be used in other countries that teach in English.”

For example, Sloan says introductory social work textbooks often focus on Elizabethan Poor Laws—an act passed in 1598 that provided a plan for helping the poor and creating a system of public responsibility in England. But these books typically ignore the ancient civilization of the Phoenicians, who had their own social system millennia earlier.

“Something like our Social Security Administration system has little meaning in South Africa, Kenya, or Somalia,” Sloan says. “So how can we create basic texts that can pull some of the American stuff out but still keep an American audience?”

Two years ago, Sloan co-wrote a paper on “Social Work Education in the Arabian Gulf: Challenges and Opportunities” to address this very question.

When she is working to develop an academic social work program—whether in the Middle East, Africa or the United States—she makes sure that she understands the international and country standards for social work and appropriate curriculum. She meets with as many people in that particular country, city or state as possible, including NGOs, government officials, and university representatives, to figure out what skills and knowledge social workers might need.

From Maine to the Middle East

A love for horses initially led Sloan to Qatar. While living in Maine, she was breeding a small herd of Egyptian Arabian horses and looking to return to academia. One day in 2009, she was reading the Chronicle of Higher Education and came across a job listing at Qatar University in Doha, Qatar.

“At the time, I didn’t even know where Qatar was, but I did know the international Arabian champion stallion was in Qatar, so I applied,” she says.

She was soon hired as the university’s social work coordinator and associate professor, teaching undergraduate courses in society and human rights, and introductory courses in social work and sociology. Then she left Qatar in 2011 to start a Master of Social Work (MSW) program at the City University of New York. Following this, she went on to develop an MSW program at Zayed University in the United Arab Emirates from 2014 to 2017.

“I fell in love with the people and the culture of the Middle East, and I would still be there if I could,” she says. “That’s a little crazy because I am a staunch First Amendment feminist, and to be in an Islamic country where I cannot say what I want to say was kind of an interesting experience.”

Upon arriving to the Middle East 10 years ago, Sloan began wearing an abayya and hijab, and eventually converted to Islam. Education is segregated by gender in public institutions in Qatar and Abu Dhabi, so Sloan only taught women. She answered students’ questions about subjects considered taboo in those countries, including rape, sex and LGBT rights.

“I always told my students that if they didn’t want to stay and listen, they didn’t have to. Or, I reminded unmarried women not to read a chapter in our assigned book about physical intimacy as a way to point out we had a chapter like that in our textbook” she says. “I did subversive things like that—covert ways around having my speech limited in certain ways.”

An Advocate for Sexual Rights

“Being in the rape crisis movement changed my life,” says Sloan, who also helped push forward an agenda to decriminalize prostitution, beginning with organizing with sex workers at the UN conference on women in Beijing. “I learned things about respect and healthy relationships that I continue to use in my personal life all the time.”

Internationally, Sloan believes she’s made a positive impact on students’ lives. “The Internet is heavily censored in Qatar and somewhat so in the United Arab Emirates, so I’ve given women exposure to things they might not have seen,” she says.

Here at home, she’s helping people understand Islam from the perspective of social work—such as that Islam is a religion of humanity, emphasizing both the responsibilities of the community as well as those of the individual.

Meanwhile, one of the next research papers Sloan intends to publish is a piece on “No Sex in Social Work.” She also wants to help create a course in the UVM Social Work program on human sexuality.

“Human sexuality used to be common in social work degree programs, but many universities phased it out 30 years ago,” she says. “We’re all talking about LGBT rights and diversity in social work, but no one is talking about fetishes or female sexuality. As social workers, we’re so uncomfortable with this topic. But we’re working with people who have experienced sexual abuse, sexual assault, marital problems, and sexual dysfunction. So, it’s about time we really start talking about sex.”

Erica Houskeeper
“Being in the rape crisis movement changed my life. I learned things about respect and healthy relationships that I continue to use in my personal life all the time.” 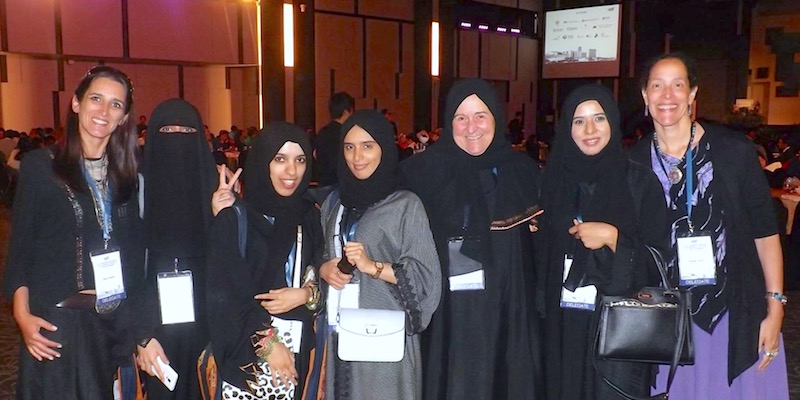 At the International Consortium on Social Development in Singapore, Dr. Sloan (third from the right) stands with her students and indigenous international scholars.