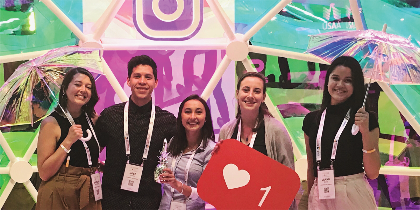 Houston, we have a solution: bring 22,000 participants together for the Grace Hopper Celebration (GHC), the world’s largest gathering of women in computing.

“I have made some of my closest friendships with people I met on the trip,” says Maddie Anderson, ’19. “This has allowed me to feel more excited and engaged in my classes and contributed to my desire to stay in the major and pursue a career in CS.”

Founded in 1994 by Anita Borg and Telle Whitney, and named for computer scientist Grace Hopper, the initial event included 500 attendees. In the years since, it’s grown to a massive conference that educates, empowers and connects women.

“For students who regularly enroll in computer science classes of 50 to 60 students, experiencing a conference of 22,000 people in tech where the vast majority are women is a supremely valuable experience,” says Dion. “The atmosphere is welcoming, the support among women is heartwarming, and the confidence of the speakers is inspiring. People feel comfortable confiding their experiences of being a woman in tech and are validated when others understand and share their own stories.”

UVM is one of 15 universities funded by the BRAID initiative to attend the Grace Hopper Celebration. BRAID stands for Building, Recruiting, and Inclusion for Diversity and is partnered with AnitaB.org, the organization that runs the Grace Hopper Celebration. “Without the funding, we would not have been able to send 19 students and three faculty and staff to attend the conference,” says Dion. “The BRAID initiative also involves surveying students in intro-level computing courses so that research can be done to help get more women in the classroom on Day 1 and to lift the retention rates of women in the discipline.”

Among the keynote speakers at the Grace Hopper Celebration was Anita Hill, who spoke the morning after the Dr. Christine Blasey Ford and Brett Kavanaugh hearings, an inspiring moment as Dion reports. Other highlights included the PitcHER contest for entrepreneurs, as AnitaB.org selected 10 finalists to compete for a total of $65,000 in prize money.

One of Anderson’s most surprising moments was attending a Google event at the Museum of Technical Art. “It was a huge packed event and we got to talking with this one woman, Amanda Casari, about her experience working at Google until we realized she herself was a UVM alum who had just started working there a week before.”

More than 400 companies were represented at the busy career fair at Grace Hopper 18. “Companies are realizing that this is one of the largest opportunities for them to reach out to women in tech,” says Dion, “so all of the tech giants attend the career fair and throw networking parties and hold interviews with attendees.”

“Make sure to practice interviewing before GHC so that you can appear confident and prepared during your interview,” says Gove. “Don’t skip out on any opportunities to network and reach out to companies that you are interested in!”

Anderson captured a day at Grace Hopper on snapchat, view her story here: