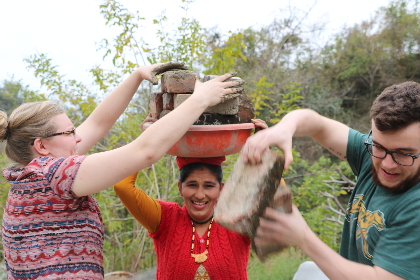 Ovens are amazing objects. For thousands of years, they’ve cooked our food and heated our homes, allowing us to thrive as a species. But in India, traditional clay ovens, called chulhas, have been producing devastating results: life-changing burns and even death when embers and ashes fall on children or women’s long-sleeved saris catch on fire. The chulhas also burn inefficiently, depleting the natural resources of the Himalayas.

What if a group of engineering students could design a chulha that would cause less harm to millions of rural Indians, and to the environment? That’s just what happened when CEMS SEED Team 10 developed Safe Stoves 4 India, which involved months of design workand, ultimately a team journey to India in March. “It was an incredible trip,” says Sydney Whipple ‘19, who led the fundraising and organizing efforts, “and I’m grateful to have had this once-in-a-lifetime opportunity.”

Why chulhas in India? As faculty advisor Dustin Rand explains, Elaine and Richard Barrett ’66, who founded the Barrett Scholarships at UVM, also donated money to the Healing Hands Hospital in Dehradun, India, which provides free plastic surgery to burn victims. “With the passion that Richard and Elaine have for burn victims, we thought we’d look into making the stoves safer,” says Rand.

Knowing what your customers want when they are 7,000 miles away, with a time change of more than 11 hours, can be a significant challenge, but Team 10 took it on by designing, building and testing a chulha in the fall semester. Since testing involved setting a fire on campus, the students worked with several safety departments. Initially, the team planned to complete the project in the United States, but Whipple’s work, along with donations from the Barrett Foundation, CEMS and others, led to the March trip to India.

“Going into this trip, I underestimated just how valuable this experience would be for our project,” says Whipple. “I expected us to get consumer feedback and ideas for design improvements, however I did not expect the unique people I’d meet and the conversations I’d have that were so meaningful. Getting real time interactions with the users was priceless.”

Working in collaboration with plastic surgeon Dr. Kush Aeron of the Helping Hands Hospital, the team built four stoves in India, learning refinements from each experience. By the fourth iteration, the students had a stove with an adjustable cook surface that could prevent embers falling out and also keep children and long-sleeved saris from the flames.

“I was completely blown away with the amount we learned in the two weeks we spent in India,” says Kaela Malaki ’19. “It was humbling and inspiring.”

The team built stoves not only in Dehradun, but also at a compound where Dr. Kush Aeron’s father, Dr. Yogi Aeron, also treats burn victims for free. Trees and plants reinforce the metal-framed architecture, creating a natural oasis. “This was one of my favorite experiences because we were able to build our stove design and get to know the burn patients and each of their stories,” says Malaki. “The patients made us masala chai and lunch using our stove!” They also traveled to the foothills of the Himalayas to visit two villages where Dr. Kush Aeron treats more remote villagers.

Rand says he was impressed by how cooperatively the students worked together. “It’s stressful—they’re building a stove with 10 local villagers watching them,” he says. “That’s a lot of pressure.” The team took its time, he adds, asking questions, helping each other and determining what was important to the villagers. When locals tried to help out in ways that were detrimental to the stove design, the students were good at explaining why a brick needed to be in a certain place. A translator, meanwhile, helped the students understand the cultural requirements of the villagers.

Beyond learning about stove design, the SEED Team also gained a new perspective on the world, and on the myriad of possibilities for engineering. “When you travel to a developing country, its an opportunity to see what you might have taken for granted,” says Rand.

“Engineering doesn’t have to be about making money or designing a new widget or cell phone or luxury item—it can make people’s lives better and help people if you use it the right way.”

Joe Doyle ’19 said that he was attracted to the Save Stoves 4 India project because it was a chance to help people instead of a company, and that the collaboration was natural. “This was not about us—we were all motivated by the same goal and were able to work together,” he says. “We knew we weren’t the most important people.”

The new design consists of clay, brick and a layer of mesh to contain the biomass. The only missing element is a chimney to contain the harmful fumes. “It’s evident, after visiting, that the air is completely filled with smoke,” says Rand. “And you can see the long-term health effects; you can hear people coughing and spitting, especially the women, because they spend so much time in the kitchen.”

Ideally, another team of CEMS students would return to India next year to figure out the chimney. Rand also envisions the possibility of an additional project in the biomedical field, perhaps designing a device to help burn victims.

“It was a great trip, and I have to thank the students for making this happen; they were the impetus for getting this going,” says Rand. “Without them leading the way it wouldn’t have happened.”

Madison Anderson
“It was an incredible trip,” says Sydney Whipple ‘19, who led the fundraising and organizing efforts for Safe Stoves 4 India, and I’m grateful to have had this once-in-a-lifetime opportunity.”