Originally from Brazil, Paula Higa has been teaching, choreographing and performing since the late eighties. In 2012, she joined UVM’s dance program, where she has taught courses in ballet, contemporary, improvisation, and Brazilian dance.

As a choreographer, she is interested in creating works that challenge her kinetic approach to dance. She is the founder and artistic director of “PH Dance & ErS” as well as the founder of “Encounters”- an improvisational ensemble where two professional musicians, Arthur Brooks and Anthony Santor, meet Higa as a dancer to improvise without a pre-determined score. Her work has been presented in venues around the United States and in Brazil. She has also performed extensively for local and international choreographers. Higa earned her MFA in Dance from the University of Wisconsin - Milwaukee and a B.S in Chemical Engineering while living in Brazil.

Paula Higa in the news:

UVM dance lecturer Paula Higa's duet found inspiration in two poems by early 20th-century Portuguese poet Florbela Espanca. Titled "The Woman That I Would Like to Be," the piece deals with themes of violence against women and will be danced by members of Higa's company, Paula Higa Dance & Ers.

"It's very aggressive in terms of movement. I want to show the kind of violence that we suffer in daily life," in physical, emotional and other realms, Higa said. The piece works with a duality, she continued: "Are you the woman who is experiencing the violence, or are you the angry woman? The characters, the dancers, switch places." 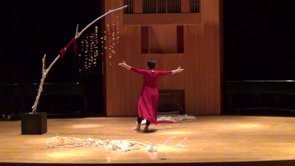