Lynne Greeley, historian and critic, has diverse interests in theatre with a focus on gender, the history of women in theatre, experimental theatre, and contemporary playwrights who are creating new waves in politics and art.  Her book, Fearless Femininity by Women in American Theatre (1910s-2010s), by Cambria Press, examines the work of female playwrights and performance artists across one hundred years of American theatre history. (Read a preview of the book and the interview with Professor Greeley). Her other publications cover the pedagogy of theatre as well the scholarly analyses of performers and playwrights alike such as Agnes Moorehead, Carson McCullers, Susan Glaspell, Martha Boesing, Megan Terry, Holly Hughes, and Sarah Ruhl to name a few. She has published in the scholarly journals Theatre History Studies, Theatre Survey, Text and Performance Quarterly, and Belles Lettres and contributed chapters to Theatre and Feminist Aesthetics, Teaching Theatre Today, Radical Collectives, circa 1968: Group Theatres and Their Legacies, and Notable Women in American Theatre among others. In addition to teaching the academic courses in the department (dramatic analysis and the histories), she created Eurotheatre, a spring course that concluded with two weeks of study in Europe during alternate summers. She also taught an upper level course based on her book through which she invited active student contribution to her ongoing and never-ending scholarship. As the dramaturg to the department, she advised student dramaturgs in their work with the faculty directors. On her own, she is a freelance writer of plays, novels, and any whimsy that crosses her keyboard, as well as a passionate traveler. Retired, she is living in France where she has become a life-long student of the French language and culture. 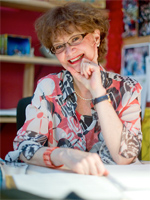