How can you learn about women's religious life in the Middle Ages? Bit by bit, as Professor Anne Clark in the Religion Department demonstrates in a recent article published in Journal of Medieval Religious Cultures titled “Remembering Phoebe in the Twelfth Century: The Forgotten Deacon in Paul’s Letter to Romans" 45.1 (2019): 1-27. An illuminated initial from a twelfth-century manuscript portrays Phoebe transmitting a letter of the Apostle Paul to the people of Rome. This unique picture of Phoebe (see below) led to an investigation of her role as deacon in biblical commentaries and how her image was reshaped in the context of debates about women's religious authority and agency. Whether she was envisioned as a lay woman carrying the message of Paul to a contentious community in Rome, a deacon administering to the spiritual and material needs of the faithful, or an abbess leading a community of spiritually advanced women, Phoebe was used to symbolize what was considered possible for women's religious aspirations. 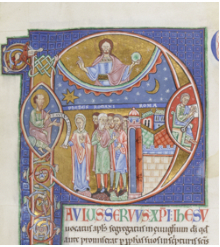