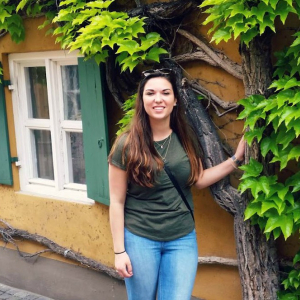 Alex Sherbrook ’17 was disappointed about missing her spring commencement at UVM, but she still wouldn’t trade it for her final semester of college in Augsburg, Germany. In German universities, the semester begins in April and ends in late summer, so she had to wait until September to finally collect her UVM diploma.

“My classes were all in German and there wasn’t as a big of an emphasis on homework as there is in our system, so It was a really big adjustment. But I’m really glad I did it.”

A psychology major with a Holocaust studies minor, Sherbrook traveled to Germany in high school as part of a class on the Holocaust—the experience sparked her choice of minor at UVM.

“I knew there was a great department in Holocaust studies here, with notable faculty organizing lectures and programs that bring scholars from all over the world to UVM,” she said. During her senior year Sherbrook worked as an administrative assistant at The Carolyn and Leonard Miller Center for Holocaust Studies, helping to promote many of these programs sponsored by the Center.

She began enrolling in German classes as a sophomore, and credits senior lecturer Theresia Hoeck with giving her fundamental language skills she sharpened at the University of Augsburg. While in Germany she also took some time to explore, stopping in Ireland, Bavaria, Austria and Poland. She revisited Auschwitz and other Holocaust sites that she’d first seen as a 16-year-old. “Going back to these places with a more in-depth knowledge about the roots of the Holocaust really sharpened my sense of how prejudices can lead to violence,” she said.

Sherbrook’s interest in the Holocaust also influenced her studies in psychology, and she is applying to graduate school to earn a master’s degree in public health. “I was fascinated by social psychology and how individual behavior can be influenced by groups. In studying the Holocaust, we see how people get pressured into things they wouldn’t normally do.”