Until 1941 the B.A. degree at UVM required the study of both Greek and Latin. With Latin alone one earned the Ph.B. degree. Shortly after the end of that requirement, but still within the echo of that venerable tradition, Jean Davison, of Glens Falls, NY, the daughter of Aldace H. Davison, UVM '1913, received a UVM scholarship reserved for those who would study Greek and Latin and matriculated as a major in Political Science in 1941, graduating with the B.A. degree in 1944. After the war she entered the Foreign Service with stints of duty in Vienna and in Athens. Athens inspired her to go to Yale, where she earned the Ph. D. in 1957 in Classical Archaeology with a dissertation on Attic Geometric ceramic workshops.

Returning to UVM in 1955 as a member of both the Classics and History Departments, she taught all levels of Greek and Latin as well as Greek art and Greek, Roman, and Near Eastern history until her retirement in 1977. She participated in excavations in Italy, Greece, Jordan and Sardinia. Her books include Attic Geometric Workshops in Yale Classical Studies (1961), Seven Italic Tomb-Groups from Narce and articles on bronze-age Sardinia, Egyptian influences on the Greek myth, and, most recently, a study of Vitruvius and the acoustic engineering of Roman theaters, in cooperation with UVM Professor of Physics Robert Arns. 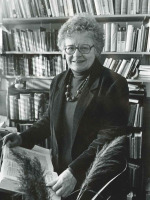