James Overfield, Professor Emeritus, a native of Buffalo, New York, attended Denison University, where he received his Bachelor of Arts. He received his Master of Arts from the University of Chicago and his Ph.D. from Princeton. He joined UVM's Department of History in 1968 and served as chair between 1987 and 1992.

His major research interests have been in late medieval German intellectual and social history. His book, Humanism and Scholasticism in Late Medieval Germany (Princeton, 1984), examines the impact of Renaissance Humanism on the German universities from approximately 1450 to 1520. He is currently doing research on church reform in pre-Reformation Germany and on the role of sports in early modern France. He has co-authored a two-volume text, The Human Record: Sources of Global History (Boston: Houghton Mifflin, 1990, 1994, 1998), for use in introductory global history courses. In addition to teaching global history, he also teaches courses on the Renaissance and early modern Europe. 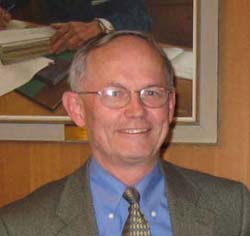