A native New Englander, Abby McGowan joined the UVM faculty in the fall of 2004.  She received her B.A. from Carleton College in 1993, and her M.A. and Ph.D. from the University of Pennsylvania in 1999 and 2003. A specialist in modern South Asian history, she teaches courses on modern South Asia, the Himalayas, and South Asian visual and material culture. Since 2016 she has served as Associate Dean of the College of Arts and Sciences at UVM, with a focus on curriculum development, first-year programming, study abroad, and diversity.

McGowan’s research explores the intersection of material culture, politics, and everyday life. Her first book, Crafting the Nation in Colonial India (Palgrave, 2009), examines the politics of craft development in colonial western India, demonstrating why and how crafts became so important during a period of nationalist development. Her second, a co-edited book called Towards a History of Consumption in India (Oxford University Press, 2010), turns to the question of consumption in late colonial India, assembling a variety of articles from scholars around the world to explore new goods and strategies available to consumers in this period, as well as some of the anxieties those opportunities elicited. Exploring related issues of crafts and consumption, she has published articles on the late nineteenth century revivals of traditional Indian design, artisanal education, and feminized consumption in colonial India in the Journal of Asian Studies, Journal of Material Culture, Journal of Women’s History, the online visual culture journal Tasveer Ghar, and elsewhere.

McGowan is building on these earlier pieces with a new book project, tentatively entitled Home Improvements: Housing Reforms and Home Ideals in Late Colonial India. The book argues that housing and home provided crucial sites for the negotiation of urban modernity in Bombay between 1900 and 1960. No longer a private concern of individuals, housing became central to efforts to remake urban life. Public officials and middle-class reformers alike used housing to discipline the city, sweeping away slums and imposing sanitary habits and proper building practices. Caste and religious groups used housing to redefine community identities, creating cooperative and philanthropic housing projects to strengthen group bonds. Consumers used housing to articulate class ideals, embracing new building styles as well as novel furnishings and products designed to communicate modern aspirations of comfort and cosmopolitanism. And, finally, officials and activists in newly independent India used housing to serve national goals, translating traditional crafts into new domestic accessories while also launching massive housing programs to materialize state concern for population. In Home Improvements, McGowan puts housing and home at the center of the history of late colonial India to argue for a materially-grounded understanding of the social, cultural, and economic politics of this era.

McGowan has been the recipient of numerous grants, including from the United States-India Educational Foundation, the American Institute of Indian Studies, National Endowment for the Humanities, UVM’s College of Arts and Sciences, and the UVM Humanities Center. Most recently she was awarded a Fulbright-Nehru Research Fellowship, to be held from January-June 2019. 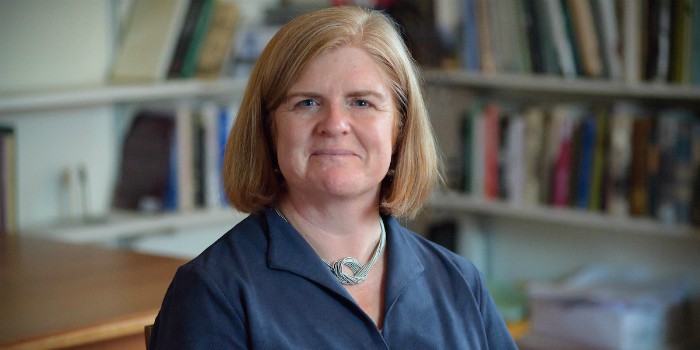