When Gef Gove ’09 began working for Junket Productions Inc. (JPI) in the summer of 2012 in Los Angeles, he never thought of eventually becoming an integral part of the company. “I just wanted to work, in any capacity, and I’m lucky they took a chance on me.” That tenacity, along with some luck, has led him to where he is today. “It certainly didn’t happen overnight, nor was it a straight shot, but I’m starting to see my hard work pay off.”

Over the past six years Gove has worked in the commercial, television, and film industries. He has worked on the production teams that support some of the largest clients and musical acts in the world including Apple, Google, Katy Perry and Drake.

Predominantly, Gove’s work has been in feature films, working in casting and in marketing and publicity—his first feature was on the set of Steven Spielberg’s Lincoln. For casting, Gove has worked for Allison Jones Casting assisting on such projects as The Heat, Master of None and What We Do in The Shadows. 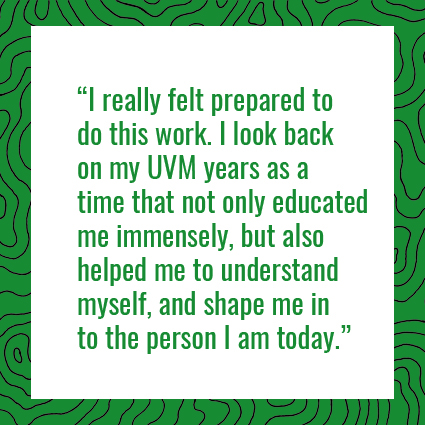 Now the crewing/schedule coordinator for JPI, Gove is a long way from being the media runner the company initially hired. The creators of what has become known in the industry as the “press junket,” JPI helps all the major studios in domestic and international promotion of their films. “I didn’t even know this part of the film industry existed, but I enjoy it,” Gove said. “Whether it’s your local TV film critic, Entertainment Tonight, or IMDB, we’re responsible for producing those interviews with a movie’s cast.”

Gove grew up in the MetroWest region of Massachusetts. His parents enforced a no-TV rule during the week, but the Gove family watched films together on weekends.

“I still have fond memories of my dad coming home from work on Fridays—we’d go to the local video store and rent a few movies to watch over the weekend. Sometimes I’d pick, and others he’d introduce me to Mel Brooks’ movies, or the James Bond franchise.”

Gove developed a broad appreciation of film, and began to seriously think about film studies as an academic focus. After being admitted to UVM he was delighted to discover the university was establishing a new film and TV studies major.

“That really tipped the scales,” he recalls. “Being one of the first students in a new program I felt like there’d be great opportunities to learn as well as know my professors really well.”

“I still maintain close connections with them to this day and I count on their support,” he said.

After UVM, Gove went on to graduate school at Florida State University, which provided a rigorous hands-on production experience. By the time he graduated he had worked on 50 films, handling jobs from director to boom operator.

Now ensconced in L.A., Gove sees the background in film theory and aesthetics at UVM, and his practical experience in graduate school come together.

“I really felt prepared to do this work. I look back on my UVM years as a time that not only educated me immensely, but also helped me to understand myself, and shape me in to the person I am today.”