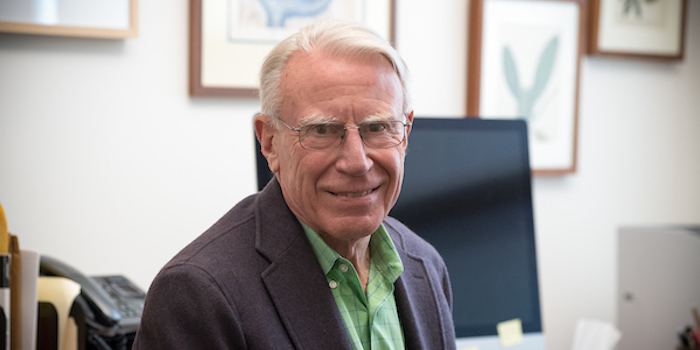 Biophysics of cell wall extension. In plants most of the growth that we see is accomplished by cell enlargement rather than by cell division, So if we want to understand growth we must understand cell enlargement which involves an interplay between turgor pressure and cell wall stretching. Cell turgor pressures in growing cells are commonly in the range of 1.0 MPa, or about 10 atmospheres. This places the wall, which encloses the cell, under considerable tension. It is this tension that causes the wall to yield, resulting in cell growth. All plant growth proceeds under these very strict biophysical constraints. Although the growth process is continuous, it can be considered to be a cycle of increasing turgor pressure, rising tensile stress in the wall, and then a yielding of the wall accompanied by a relaxation of the stresses. Dr. Chunfang Wei and I have been working to develop a new paradigm within which we can understand this process.

Loss of stability. In real life rapidly growing cells maintain their pressures very close to the maximum. Growing cells which experience even a very small drop in turgor pressure stop growing immediately, implying that there is a threshold for growth. Previous thinking attributed the stress relaxation step to a "viscoelastic or creep-based" deformation. However there are significant problems with this model, not the least of which is that viscoelastic or creep-based yielding can occur at any stress level as the cell pressure rises from zero to its maximum. This means that viscoelastic/creep theory cannot predict the working turgor pressures of growing cells. We propose a more predictive approach that is rooted in the physics of thin-walled pressure vessels. We have shown that as the pressure in the cell rises, the stresses in the wall reach a level of critical instability, at which point it yields suddenly, increasing the volume of the cell slightly. This instability behavior flickers over the surface of the cell, moving from one region to another depending on which has the lowest critical pressure value. This explains the abrupt cessation of growth in cells where the turgor pressure drops slightly, and allows us to predict the working turgor pressure of actively growing cells knowing only the thickness and geometry of the cell wall and its "Modulus" or mechanical stiffness. One of the strengths of Loss of Stability Theory is that it has been developed from "First Principles," meaning that it is based in mature physical theory. We believe that it can shed light on many of the puzzling aspects of plant growth, including many aspects of growth patterning in multicellular tissues, and also the cessation of growth during secondary wall synthesis.

A biophysical logic for plant growth. Most recently, we have developed a method for studying the growth of individual algal cells under "Hyperbaric" (high pressure) conditions. Growing the giant-celled fresh-water alga Chara corallina in a specially designed pressure chamber we find that as the pressure ramps up from normal "atmospheric" pressure to pressures in excess of 8 atmospheres the growth of the cells is initially depressed, but then accelerates as the pressure continues to rise. This non-intuitive behavior may reflect a pattern of yield behaviors known to materials science as "von Mises" behavior, reflecting the yielding behavior of materials under complex stress conditions. The implications for plant science lie in the fact that it may provide a way for growing plant cells to manipulate the growth of their neighbors during development, effectively providing them with a biophysically based switch which they can use to trigger events at specific locations.

Reproductive differentiation. Unlike animals, plants do not maintain a differentiated reproductive germ-line which is set aside during early embryogeny. The cells that undergo meiosis must be differentiated out of originally clonal (genetically identical) somatic cells. But what is the signal that triggers this initial act of reproductive differentiation? It cannot be a genetically specified event because all of the cells have the same information to begin with! We believe that the initial selection and triggering of the cell or cells that will differentiate into reproductive cells relies on the architectural and mechanical properties of plant tissues, and that the sporangium, the most universal feature of plant reproductive development, has evolved as a stress-mechanical device for triggering pre-meiotic differentiation in otherwise undifferentiated and identical plant tissues. We are developing a number of microscopical methods for mapping the early development of the sporangium in the water-fern Ceratopteris. Using this information we hope to distill out the rules which govern the selection of individual cells during the events leading up to differentiation.

EVOLUTION OF THE PLANT CELL

The word on the street is that Maize (known as “corn” in the United States) shares some 60% of its genes with humans, reflecting an ancient lineage shared by the plant and animal kingdoms that predates multicellularity itself. But plants are structural beings, and although genomics and biochemistry are fundamental to understanding their common cell biology, it is becoming increasingly apparent to those who study these things that plants have evolved very differently from animals. Animals live in and around plants. They derive nourishment from them but do not compete with them directly. Animal evolution seems to have organized itself around movement. Animals move to find food and shelter, and need to actively interpret their surroundings in order to avoid predation. At the developmental level too, animal cell mitosis involves the parent cell pinching in half. The two “daughter” cells are then free to migrate independently from one location to another. Cells slide past each other to create new neighborhoods and foster functional relationships in ways that are unavailable to plant cells.

When plants emerged onto dry land, more than 500 million years ago, competition for sunlight and soil nutrients drove the evolution of the stem, the extension of a vertical axis between earth and sky. Building a plant is much like building a skyscraper. New living space is created at the top. Walls have to be correctly installed in order to support the loads. The construction materials are complex and their behaviors need to be finely tuned. Evolution has done all this. Plant cell division is exactly like constructing a new partition wall across an existing room. The daughter cells are fated to share a common wall permanently. From the very first cells of the young embryo to the full extent of the mature plant, the individual cells making up the plant body are permanently trapped within a system of rigid walls and do not move relative to each other. It is the universal presence of the cell wall that makes it possible for plant cells to develop significant internal hydrostatic pressures. Every living plant cell is first and foremost a fragile pressure vessel. Hydrostatic pressures in living plant cells are extreme by animal standards. A plant cell with positive internal pressure (Turgor) as high as 10 or 15 Bar (1.0-1.5 MPa) may find itself immediately adjacent to a cell with pressures of negative 10 or negative 15 Bar!

These extreme physical constraints mean that the repertoire of cellular behaviors available to growing plant cells is limited. The need for rapid long-distance signaling is similarly limited. There is no active imaging of the environment, no moving edge detection, no need to link explosive muscle contraction to visual or other inputs, no hunger, no fear, and no need for the complex developmental controls underlying social interaction. Beyond the primordial commonalities of biochemistry and metabolism then, we see that multicellularity arose independently in plants and that the construction of the organism, from the fertilized zygote to the mature plant, is built around a very different set of premises.

It all begins with photosynthesis of course, which excuses plants from the necessity of locating and capturing a meal. Plants have no need for an active fight-or-flight response. They cannot run away, and because of their sessile, autotrophic life histories, plants have no need for the sensory complexity and elaborate hormonal control systems underlying muscular and neurologic development in animals. As a result, the evolution of land plants has been driven by a simpler structural logic. Morphology is immediately determined by the physical behavior of the cell wall system through the installation of new partition-walls and the directionality of pressure-driven cell volume growth. This system of controls, although ultimately depending on the transcription and translation of genetic information, can be understood as an independent “Epigenetic” control network whose immediate output is shape and form. So the ultimate logic underlying the evolution of plant form is essentially physical, with the properties of the materials at hand being constantly fine-tuned by the cellular machinery that we call “biochemistry” or “cell biology”.

Ultimately, the same may be true of animal development, but in plants the systems are simpler and more accessible to a kind of architectural analysis. Because plant cells cannot move once division has completed the patterns we see in any crude section through a stem or a leaf or a root can be interpreted directly as a frozen history of cell division. What you see is what you get. This means that for the itinerant physicist looking for a way to approach the confusing world of living things, the plant kingdom is the perfect place to start. Evolution has made use of the most exquisite nanostructural materials and the most sophisticated engineering behaviors to construct towering redwoods and prairie grasses.

The next time you hold a beautiful split-bamboo fly rod in your hand think of the careless role evolution played in its construction and how that contributes to its ability to store energy and project a line while damping out unnecessary vibration.