An observer of the sophomore seminar course “Vaccines on Trial” would likely mistake it for a class on constitutional law or American history. With arguments from prosecution and defense teams, testimony from historical figures and shouts of “objection!” and “order in the court!” it’s not the typical course taught by faculty in the Department of Biomedical and Health Science.

“Vaccines on Trial,” HCOL 186, explores the pros and cons of a universal vaccination mandate for all citizens of the United States. The course plays out like a trial set in the year 2222, a hypothetical future where a continued rise in the global population contributes to increased rates of influenza, smallpox, rotavirus, diphtheria and measles, threatening the stability of human life. In this imagined scenario, U.S. health leaders and politicians assembled a team of experts to comprehensively investigate and decide on the issue of a national vaccine mandate by way of legal debate.

Eyal Amiel, assistant professor at the University of Vermont Biomedical and Health Sciences Department in the College of Nursing and Health Sciences, developed and teaches the course for Honors College sophomores to help them discover their own areas of interest and develop the necessary research skills to complete an independent thesis their senior year.

At the start of the course, students learned about the history of communicable diseases, vaccine efficacy, health policies and concepts including public good versus individual rights, vaccine cost and liability and herd immunity — the resistance to the spread of a contagious disease within a population that results when a majority of individuals become immune to the disease through vaccination.

The students divided into teams for defense (supporting the vaccine mandate) and prosecution (opposing the mandate). They worked together building their cases, brainstorming topics for research, developing witness lists and outlining argument strategies. The course culminated in a fully enacted mock trial, with faculty members serving as jurors and Amiel presiding as judge.

“I feel like I was given the perfect opportunity to defend an idea that I am passionate about, although it turned out to be more difficult than I thought going into this class,” said Clara Sarantopoulos ’21, who took the course as an environmental science student focusing on conservation biology and biodiversity. “I grew up in a family full of lawyers and thought this would be a fun way to explore the research around vaccines.”

As a real epidemic of measles currently threatens Americans’ health, this course has particular relevance. Measles cases are at a 27-year high in the U.S., according to the U.S. Centers for Disease Control and Prevention, with more than 1,000 cases so far in 2019, and more likely as unvaccinated people become exposed to this highly contagious disease.

“The debate about vaccines is extremely present in our lives right now, so I wanted to learn more about the different sides to his argument,” said Abby Goldman ’21, who took the course as a health sciences major and plans to attend medical school. “Not only have I learned more about infectious diseases, but also lots about vaccines in our society today — and the scientific, legal and ethical aspects of vaccinations. This class will help me make educated decisions and educate others going forward.”

But this class was not about epidemics or vaccines, or even public health policy. While the students — whose majors included biochemistry, political science, psychological sciences, English and elementary education — learned about small pox and Spanish flu pandemics, early inoculations, forced quarantines and the U.S. Constitution, they gained skills in gathering, analyzing and critiquing evidence, working interprofessionally and creating a compelling academic argument.

“The point is to introduce students to the research process to prepare them for their honors theses,” said Amiel, an expert on cellular molecular biology and disease immunity. Amiel’s research focuses on mechanisms of molecular control of cellular metabolism in response to pathogenic stimuli. “When you do research, you have to read everything on your topic and condense it into a clear argument. But answers are never completely clear — there’s always more than one side. I chose a paradigm that is difficult. Vaccines pose moral, ethical and personal liberty issues, and both sides have reasons that they feel are legitimate.”

He developed the course prior to the current measles outbreak, basing the format on his own experiences as a student.

“I had a course in high school where we put Julius Caesar on trial. It struck me as a great way to learn, as a semi-competitive game, to inject a sense of pressure in a fun way to know what you’re talking about,” said Amiel. “Education is about empowering students to get answers to their questions in life, and strategies for getting information and how to incorporate that into their lives. When we do it as a trial, research happens by accident because you are playing a game. There’s an element of competition, pride and performance.” 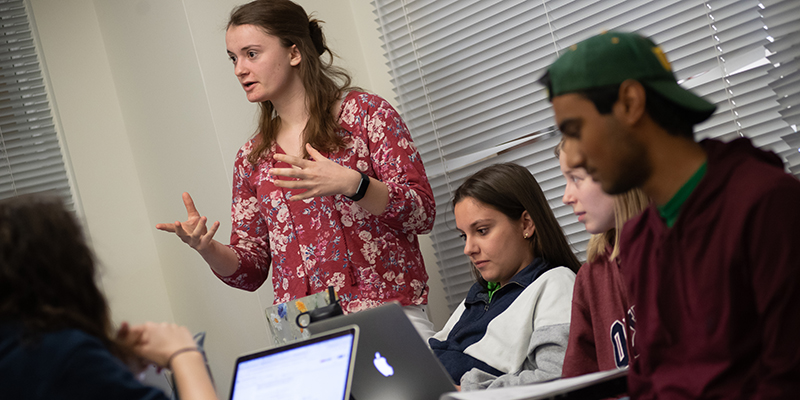 Before going into the trial, the students agreed that they were not arguing for or against the idea of vaccination in general, but rather about a government-enforced national vaccine mandate.

To make their case, the prosecution team called witnesses including Antonin Scalia, the late justice of the U.S. Supreme Court, who discussed Tenth Amendment protection of states’ rights to sovereignty and testified that a federal vaccine mandate undermines democracy. Prosecutors also called to the stand former directors of the U.S. Centers for Disease Control and Prevention and the Alliance for Health Policy, whose testimonies elicited arguments about the inequity of vaccines for people who lack health insurance or access to clean water, which is necessary for treating disease outbreaks.

“A national vaccine mandate heightens inequality among American people,” argued the prosecution. “It is unjust and an infringement on human rights...People forced into quarantine are poor, vulnerable citizens with few resources…We must fix environmental issues and economic inequities, rather than force vaccinations.”

Countered the defense team: “Is liberty worth the price of life?…Those who are most vulnerable will be impacted the most by the spread of disease...Climate change puts a greater strain on clean water resources...The cost of a vaccine is much less than a trip to the emergency room. By the time the ambulance is called, it’s usually too late…Poverty should not be a death sentence in preventing diseases.”

The defense referenced Abraham Lincoln’s restriction on civil liberties during the Civil War, and called to the stand Supreme Court Justice Clarence Thomas as well as the smallpox virus — represented by a student wearing a nametag declaring “HELLO, my name is Smallpox!” — who focused on the dangers of diseases and efficacy of vaccines.

At the trial’s conclusion, the jury voted 2-1 in favor of the defense. Sure, as biomedical and health sciences professors, the jurors may have held some biases, but the courtroom experience gave everyone pause for thought.

“This active approach to learning challenged the students to become experts in the subject matter and explore the issue from diverse perspectives that were perhaps not in line with their own. The result was a very informative and engaging trial, where the students really showcased their knowledge,” said Biomedical and Health Sciences Senior Lecturer Deborah Hinchey, who served as a juror.

“Everyone gets to learn about both sides of the argument, not just their own, which I think is really beneficial as I am able to form my own opinions even though I have to argue one side,” said Goldman.

Sarantopoulos added, “Having so many people in a group working on a topic that wasn't necessarily in their field of study was really cool, and everyone had something unique to bring to the group.”